It’s literally raining Sony Sirius, aka Sony Xperia Z2, leaks from the past few days. Over the weekend, we saw the handset posing for the camera, followed by a list of specifications getting leaked  earlier today. The handset is rumored to come with Android 4.4 KitKat pre-installed out of the box, but we’ve yet to witness the UI it will bring at the table. 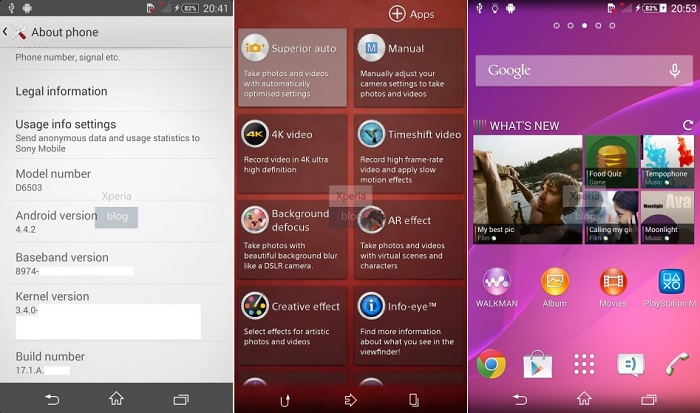 Well, the folks at Xperia Blog have posted a hanful of screenshots of the upcoming KitKat UI for the alleged Sony Xperia Z2, aka Sirius, and shows almost all the changes. At first look, a Sony Xperia user can clearly see that there’s resemblance to the Xperia UI that’s on board on other Sony devices, but with a few enhancements and changes such as new wallpapers, themes and a bunch of KitKat features.

Other features include gestures control, built-in answering machine in the dialer, two home launchers including Xperia Home and Smart Home (something with big fonts for accessibility by elderly and people with disabilities), status and notification bar personalizations, ability to change the default SMS app, improved power management and much more.

The complete gallery of the screenshots can be viewed at Xperia Blog link below. What do you think about the updated UI from Sony? It seems the Japanese OEM is kicking things off with 2014 in terms of software and new devices.

There’s no official word about its launch, but the handset may see the light of the day at the Mobile World Congress next month.