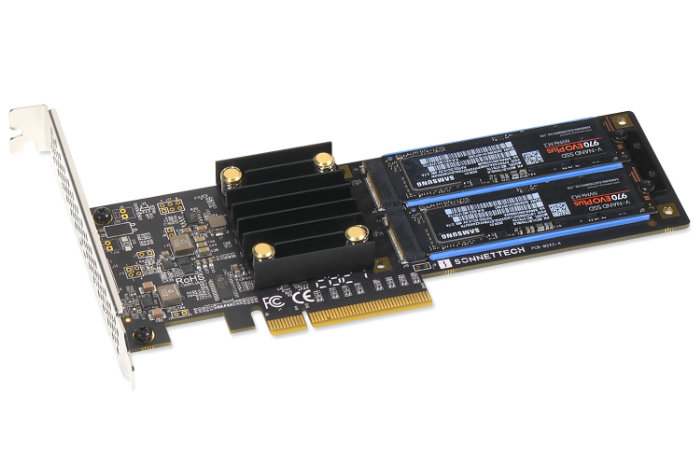 If you are considering adding extra storage to your computer, NAS or Thunderbolt expansion system’s PCIe card slot, you might be interested to know that Sonnet has this week unveiled its latest adapter in the form of a PCI Express 3.0 card equipped with two NVMe SSD slots.

“The Sonnet M.2 2×4 Low-profile PCIe Card enables users to mount two M.2 NVMe 2280 PCIe SSDs (sold separately) into almost any expansion card space with an available x8 or x16 PCIe card slot; using today’s highest-capacity SSDs, up to 16 TB of storage capacity may be installed. RAID 0, RAID 1, and JBOD configurations are supported, providing users with flexibility in configuring the SSDs for best performance or data safety, or both.”

“For users who need to add internal storage to their computer and require ultra-high-speed data transfer speeds for a smooth workflow — such as video editors working with 6K and greater resolution footage — an NVMe M.2 SSD-based upgrade is ideal. Many computers do not include slots to support installing M.2 SSDs directly but do include PCIe expansion card slots.

With Sonnet’s M.2 2×4 Low-profile PCIe Card installed, a user can mount two SSDs in a single PCIe slot — with no cables, adapters, or mounting trays required — for instant-access media storage or as a high-performance scratch disk. For users whose computers lack PCIe card slots — such as notebooks, mini, and all-in-one desktops — but include Thunderbolt ports, installing the Sonnet card into one of Sonnet’s multi-slot Echo Thunderbolt to PCIe card expansion systems connects the M.2 2×4 card’s dual SSD slots through a single cable.”

“The Sonnet M.2 2×4 Low-profile PCIe Card requires only a low-profile card space and includes both full-height and low-profile PCIe brackets — so it is ideal for use in most any desktop tower, mini workstation or server computer, or Thunderbolt to PCIe card expansion system with an available x8 or x16 PCIe slot. Because the Sonnet card employs a high-performance 16-lane PCIe 3.0 bridge chip, it doesn’t require specific SSDs or a particular motherboard to operate, nor PCIe bifurcation to support RAID features.”