A solar plane flight in Switzerland has just made a landmark aeronautical achievement by flying non stop for over 24 hours throughout the night by using energy collected during the day from its massive solar panel wings.

The flight was the longest and highest ever recorded by a solar powered plane, by reaching an altitude of 8,564 meters,( 28,000) feet, above sea level, and an average speed of 23 knots (25 miles per hour). 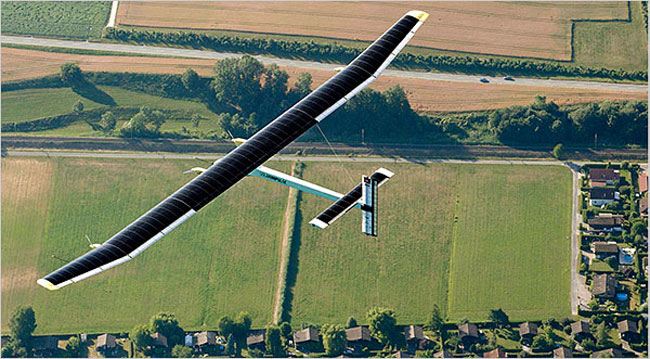 The plane called the Solar Impulse has more the 12,000 solar cells collecting energy on its 210 feet wing span. The main aim of the flight was to proved that it is possible to fly a solar powered plane using energy collected during the day throughout the night.

The pilot Andre Borschberg said this to a Times reporter on landing:

“I’ve been a pilot for 40 years now, but this flight has been the most incredible one of my flying career,” Mr. Borschberg said as he landed, according to a statement from the organizers of the project. “Just sitting there and watching the battery charge level rise and rise thanks to the sun. I have just flown more than 26 hours without using a drop of fuel and without causing any pollution.”