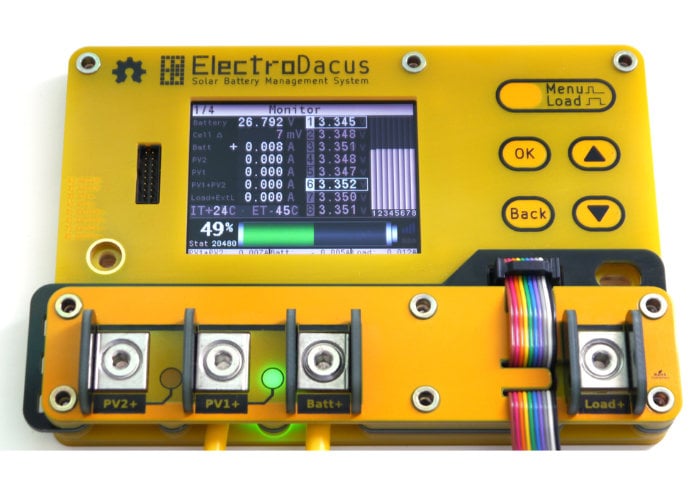 Dacian Todea based in Regina, Canada has launched a new Kickstarter campaign this week, once again taking to the crowdfunding campaign site. To raise the required funds needed to take his new Solar BMS and Digital MPPT designed for PV electricity and heating into production. The Solar charger is the fourth Kickstarter campaign from Dacian and is suitable for any type of Lithium battery and Digital MPPT for the most cost effective heating as a Net Zero energy solution, says Dacian.

Watch the demonstration video below to learn more about the latest solar charger created by Dacian who explains a little more about its design construction and hardware. “SBMS0 – will be a new low cost variant based on multiple requests and have the same 2.4″ LCD as the SBMS40 compatible firmware with all the futures, just missing the power electronics (built in current shunt, ideal diode, power mosfets and WiFi module) but have all other functions like full BMS functionality including cell balancing and the battery current will be measured with an external current shut of up to 500A same as the other SBMS models and have the same EXT IO3 and EXT IO4 for remote ON/OFF an inverter and or a charger (also known as Under voltage and Over Voltage disconnect signals).”

“So SBMS0 can be used for example with the Victron Multiplus inverter/charger as they support separate remote ON/OFF for inverter and charger. External DC SSR (Solid State Relay) can be used to add PV panel charging capability to the SBMS0 getting the same functionality as the SBMS40, SBMS120 or even more up to 500A thus being very flexible and cost effective. An ESP32 WiFi module can also be added externally to the SBMS0 as the firmware will automatically support that, same as on the SBMS40 and SBMS120 that have the ESP32 built in. But data can also be accessed over serial port (UART) if you want to interface with something like a Rasppbery Pi or any other computing device.”

For more details and full specifications together with a complete list of all available pledge options jump over to the official Kickstarter crowdfunding campaign page by following the link below.