That slow and steady cyborg snail may have just enough juice to win the race. 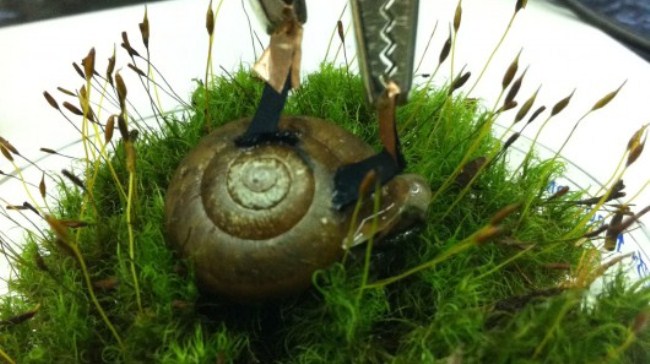 Earlier this year, a cockroach was implanted with an enzyme based biofuel that allowed it to produce power for sensors, recording devices, etc. Now a team from Clarkson University has reached a similar feat with a living snail.

The biofuel-cell-into-the-snail idea was from Evgeny Katz,  the Milton Kerker Chaired Professor of Colloid Science at Clarkson University. The snail lived and provided electrical power for 6 months using glucose and oxygen in the snail’s blood as biofuel.

The implanted snails produced up to 7.45 microwatts, but this declined by 80 percent just after 45 minutes. Reducing the extracted power to 0.16 microwatts allowed for the drawing of continuous power.

After her project with snails, Katz’ is planning to charge larger creatures, like lobsters.

Katz’s research was published online in the Journal of the American Chemical Society.