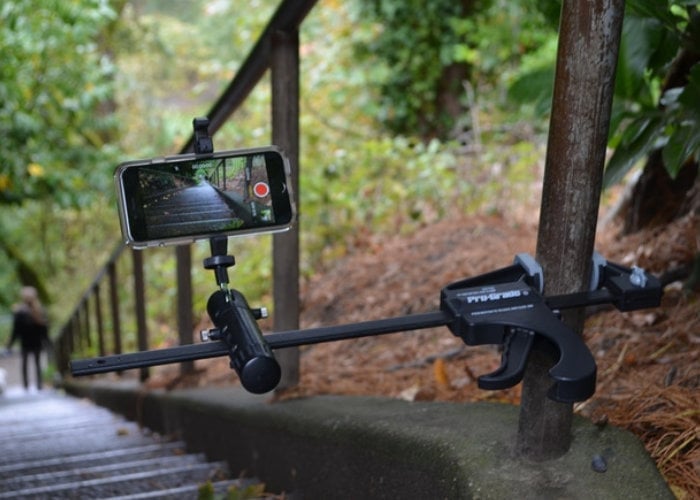 Smartphone photographers looking for a quick and easy way to hold and mount their smartphone in almost any position, may be interested in the PiggyBack. Designed to be used with smartphones and small digital cameras the camera support system can be mounted in a wide variety of different ways. Photographer Erik Haugaard and creator of the PiggyBack explains more about its inspiration in the video below.

“The PiggyBack was created to fulfill my need, as a product designer to have a compact camera or smart phone support system to use in my small attic office for taking pictures of protypes I’m working on. Once the device was complete it became clear that there were many uses for this flexible mounting system. The money raised will go primarily towards injection mold tooling but also to continue the patent process for the device and fulfill Kickstarter rewards.”

“Design for the PiggyBack is virtually complete. All the parts have been costed out, with just a few more tweaks to the files required before tooling can be initiated. A provisional patent is in place and we are ready to move forward and into production! Boing Design believes that manufacturing locally in the United States where environmental laws are enforced and the polluting emissions from transporting parts long distances are minimized is the best way to be green. Boing pledges to make every effort to manufacture all major components locally.”

The PiggyBack has been launched via Kickstarter this week with earlybird pledges available from just $50 or roughly £41. If the campaign is successful worldwide shipping is planned to take place during March 2020. For more details and examples of how the PiggyBack camera support system can be used jump over to the Kickstarter project page.