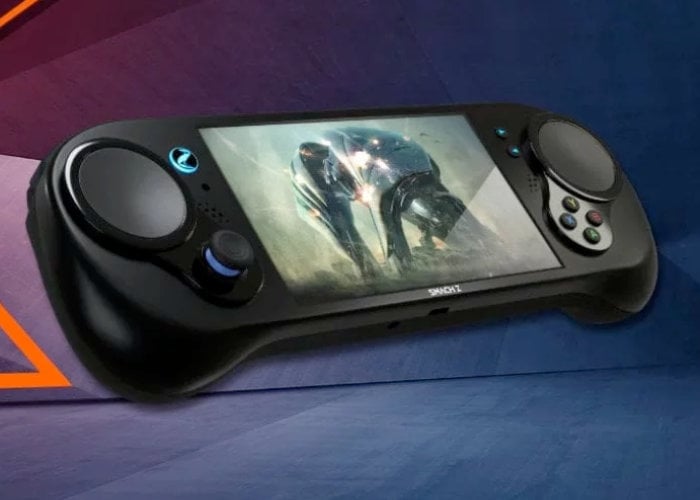 It has been a long time since the crowdfunding campaign for the Smach Z handheld gaming PC was funded, but the development team have continued pushing forward and now a final prototype has been provided to YouTuber The Phawx for a quick hands-on in boxing and gameplay test. Check out the three videos below to learn more about the latest version of the Smach Z.

The Smach Z handheld gaming PC is expected to ship sometime before 2020 and prices listed on the official website indicates that a $699 console will include 64 GB of storage and 4 GB of RAM, while the flagship model priced at $1198 is equipped with 256 GB of storage and 16 GB of RAM and dual come running Microsoft’s latest Windows 10 operating system be equipped with a five megapixel camera. The lower price system will be Linux-based and will run the company’s Smach OS.

In the one video below heat issues are discussed although now Phawx says he now has these under control enabling the system to be powered by 25 watts, hence enabling the processor and graphics to run at higher speeds, allowing games to hit 30 frames per second.

A few other interesting things to note from the Phawx’s videos:

– This thing is small for a gaming PC, but it’s bigger than a Nintendo Switch and not exactly pocket-sized.
– There’s a DisplayPort output, but no HDMI so it’ll probably be easier to connect to a monitor than a TV.
– There’s a fan (with speed configurable in the BIOS), but the Phawx says it wasn’t noisy enough to bother people on a bus or at his office.
– The Smach Z comes with a 60W USB-C charger