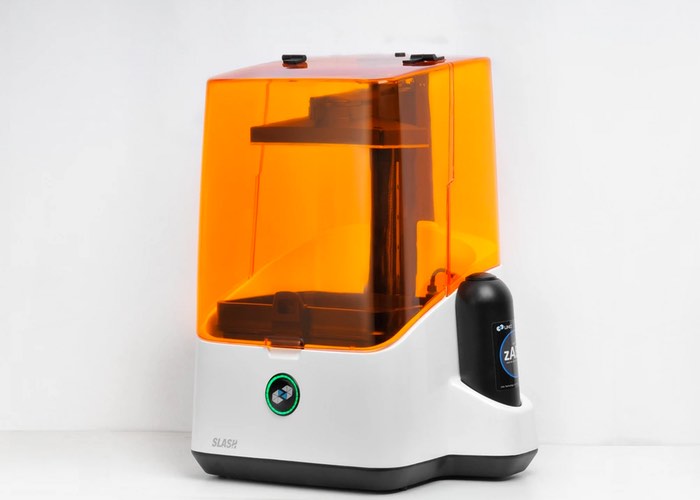 Anyone in the market for an affordable yet professional SLA 3D printer may be interested in a new printing system that has been unveiled by Uniz Technology, that takes the form of the SLASH LCD-SLA printing system.

The SLASH SLA 3D printer has been specifically developed by the company to provide users with an easy-to-use system that also provides a high resolution output at a fraction of the cost of other printers on the SLA market. Watch the promotional video below to learn more about its design and reproduction capabilities.

The new SLA 3D printer has launched on the Kickstarter crowdfunding website and already blasted past its required $50,000 pledge which still 29 days remaining on its campaign. The creators of the SLASH SLA 3D printer explains more :

SLASH is an ultra-high resolution, super fast, liquid crystal display (LCD) contact exposure 3D printer, designed with the goal of achieving high quality 3D prints without sacrificing speed or user friendliness. SLASH performs at the same level of precision and speed as industrial 3D printers while maintaining affordability for everyday consumers. With easy-to-use software that supports a variety of desktop and mobile platforms and cloud integration for sharing and publishing your creations, high quality 3D printing has never been more accessible.

Are you frustrated with the low speed and high failure rate of laser 3D printers when printing large solid objects? Do you dream of having the speed, resolution, and reliability of a truly professional 3D printer on your desktop? We’ve created an advanced and easy-to-use system that rivals the output of industrial 3D printers at a fraction of the cost.

With a WQXGA (2560 x 1600, 339 ppi, 75 µm x-y axis) ultra-high resolution IPS LCD screen and ball-bearing screw (10 µm z axis), SLASH is capable of delivering industrial grade accuracy and details. For your reference, a WQXGA DMD chip (used for DLP projectors) alone would cost you over $3,500****. A DLP 3D printer system with this kind of chip, adding image correction optics and other components, is definitely going to be very expensive. On the other hand, with LCD contact exposure technology, SLASH can deliver equivalent results with much faster speed, only at a fraction of the cost.

For more information and full specifications on the SLASH SLA 3D printer jump over to the Kickstarter website for more details and to make a pledge from $999 for super early bird backers.