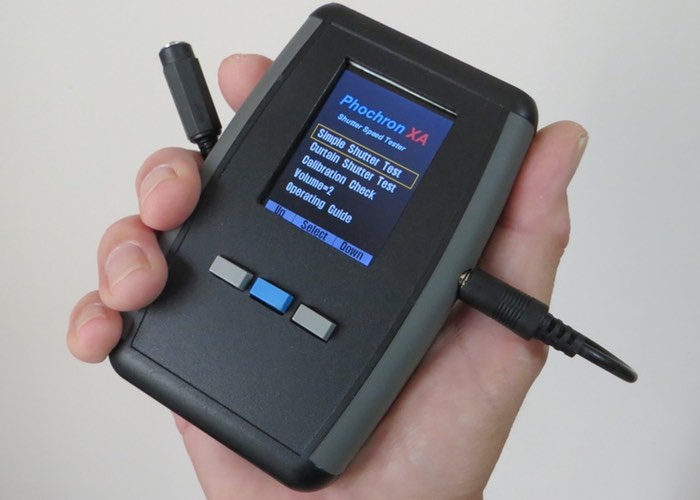 Photographers searching for a professional shutter speed tester may be interested in a new device which has been created by Eric Bergstrom and this week launched by the Kickstarter crowdfunding website.

The Phochron XA Film camera shutter speed tester has been designed to offer a quick and accurate handheld tester that displays both numerical timing and a scope-like waveform.

Watch the video below to learn more about its inspiration, features and benefits. It’s creator Bergstrom explains a little more about his design and functionality.

In the last few years, there has been a surge in popularity of older, film based camera equipment. Many photographers have been making a move back to film, or experimenting with film to broaden their creativity.

Vintage and classic cameras are more popular than ever, and almost every one that is offered for sale on the big auction sites is quickly snatched up by collectors and users alike. Prices are actually starting to rise as demand is outpacing the supply. Many times, neither the buyer or seller has any idea whether the camera is working, and will advertise that it is sold as “untested”.

I feel that there is a need for the camera collector, user, or dealer to be able to test a key component of the camera: the shutter. Let’s face it, a camera is simply a light tight box that has a sophisticated mechanical shutter inside. The shutter is the second most important part of making a proper exposure, next to the lens.

This is why I decided to design and build the Phochron XA shutter speed tester. I wanted a quick and simple handheld device that within minutes could tell me whether the shutter is operating up to spec, or if it is time for repair. Many times you can compensate for a slow shutter (most older shutters run slow) by changing the film type or the aperture settings. Consistency of shutter timing is critical too. So many I’ve tested show very inconsistent shutter times.

For more information on the new Phochron XA Film camera shutter speed tester jump over to the Kickstarter website for details by following the link below.