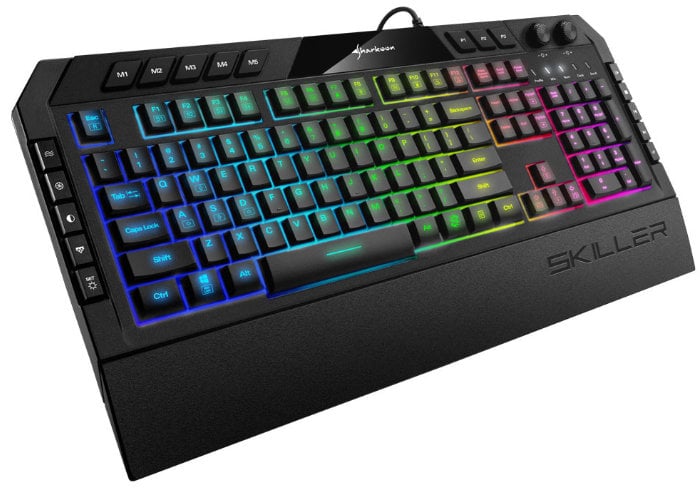 Sharkoon has announced the availability of its new gaming keyboard in the form of the SGK5, offering an affordable gaming keyboard priced at €40. Equipped with a removable palm rest and supplied with “intuitive gaming software” the SKILLER SGK5 gaming keyboard offers full N-Key rollover support allowing numerous keys to be pressed at once for complex manoeuvres during gameplay.

“With customizable RGB backlighting, high-performance gaming software and a number of dedicated special keys, the SKILLER SGK5 is made for convenient multimedia enjoyment and exhilarating gaming experiences. And those who like the typing feel of rubber dome will be especially pleased. This is ensured by quickly-responding keys with a flat design and full n-key rollover support, which is a feature usually reserved for mechanical keyboards only.”

– Fast Reacting Rubber Dome Switches
For inputs with an especially quick response, the SKILLER SGK5 is equipped with mid-height, quick-triggering keys with a keycap height of only seven millimeters. The life cycle of the rubber domes amounts to at least ten million keystrokes, and the keyboard can thus be expected to have a long lifespan. If desired, it is also possible to adjust the key response time.

– Practical Special Keys for Gaming and Multimedia
In addition, Sharkoon has equipped the keyboard with dedicated keys for lighting effects, macros and game profiles. The keys enable uncomplicated use in everyday situations and while gaming. With two integrated rotary knobs on the top right corner of the keyboard, the volume and illumination brightness can be intuitively adjusted.

– Gaming Software for Full Modification
With the free, downloadable gaming software from Sharkoon, not only the illumination but also numerous keyboard functions can be controlled. Macros and multimedia commands can be easily programmed, reassigned and saved in a number of profiles. Adjustments are saved in the onboard memory of the SKILLER SGK5.