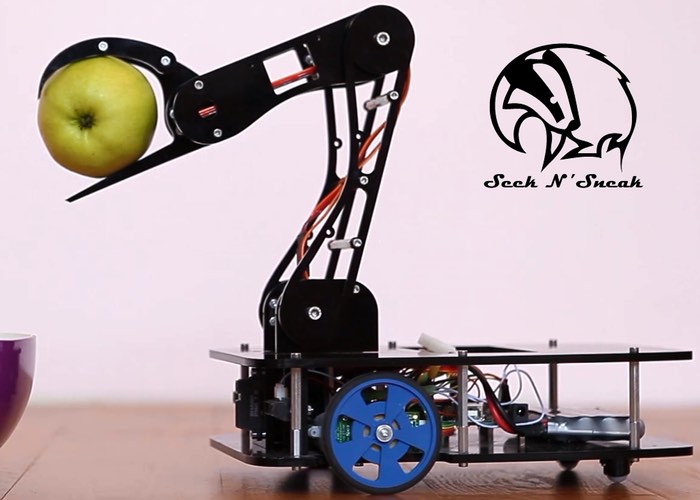 Building Arduino projects can be a lot of fun, but building your very own Arduino robotic pet takes it to the next level, check out the new Arduino powered Seek N’ Sneak 2 kit below.

Konstantin Stolpovsky has developed the Seek N’ Sneak Arduino robot kit, that once built provides users with a self-controlled robot that is capable of finding objects grabbing them and relocating them.

Seek N’ Sneak 2 is currently available to back over on the Kickstarter crowdfunding website with pledges starting from €200. Watch the video below to learn more about its functions and capabilities.

Why did we develop this robot? There is a very short answer: kids! They need 10 to 30 minutes (depending on their temper) to scatter literally all the toys they have over their rooms, so initially we were looking for some way to automate a tedious process of daily toys collection.

We solved this problem, but we realized that there are many other cool applications for this robot. We found that our robot can be smart, fast, strong, fearless and funny, just like a badger, and we named it Seek N’ Sneak.

Seek N’ Sneak is an Arduino powered self-controlled robot which is able to run around, find objects, grab them, relocate them and do many other useful and funny things. The two driving wheels of this robot are powered by independently controlled motors and equipped with 128-steps-per-revolution (or similar) encoders allowing for precise control of the angular position of the wheel, as well as its velocity and acceleration.