According to Seagate, this new hard drive is capabale of transfer speed of up to ten times that of a YSB 2.0 drive, and can transfer 25GB of data in under five minutes. 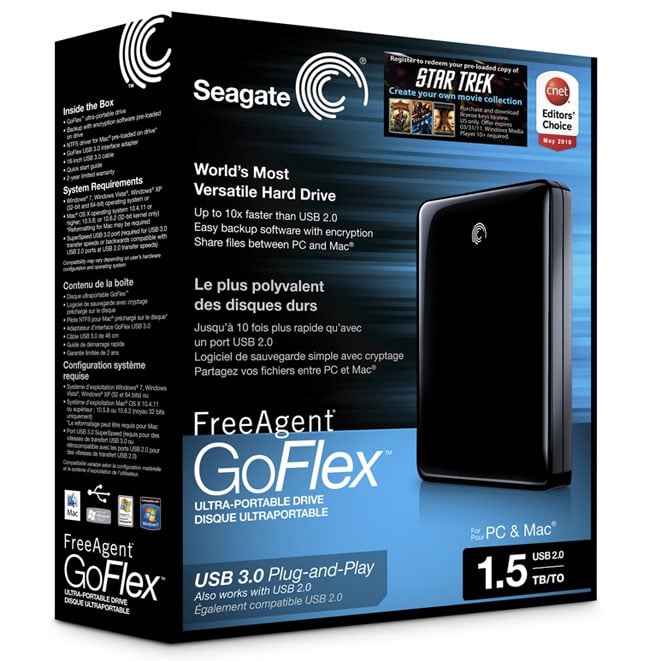 The Seagate GoFlex 1.5TB portable hard drive is now available for $249.99 from Seagate.

“Today’s announcement is a ‘triple-crown’ of consumer technology—packaging record breaking capacity, blazingly fast USB 3.0 connectivity and the bonus of movie entertainment—making the 1.5TB GoFlex™ ultra-portable drive an unprecedented and innovative solution,” said Darcy Clarkson, vice president of Global Retail Sales and Marketing for Seagate. “Bringing this solution to market on the heels of our 3TB GoFlex™ Desk drive and the Momentus® XT solid state hybrid drive is proof of Seagate’s continuing technology leadership and tradition of setting storage industry milestones.”

Shipping now in the United States and rolling out globally later this year, all 1.5TB GoFlex ultra-portable drives1 will ship with a USB 3.0 interface cable, accelerating the transfer speed of a drive up to 10x when connected to a USB 3.0 port, when compared to a USB 2.0 port. For example, a drive using a USB 3.0 connection can transfer a 25GB file in under five minutes versus the 14 minutes it would take using a traditional USB 2.0 drive2. In addition, all GoFlex ultra portable drives will now also ship with the new superspeed USB 3.0 cable, which will still continue to work with existing USB 2.0 ports.
“Consumers continue to push the growth of digital music, photos, and video content, and increasingly want access to this content from a variety of CE devices, including a PC,” says John Rydning, IDC’s research director for hard disk drives. “Higher capacity disk drives in combination with higher bandwidth interfaces like USB 3.0 will help to make a greater number of large multimedia files more accessible from multiple devices in the home.”

A key addition to the GoFlex™ family, the new 1.5TB GoFlex ultra-portable drive delivers ultimate flexibility in how people collect, protect, share and enjoy their digital libraries, all in a convenient compact package. In addition to coming bundled with USB 3.0 connectivity, the drive can be used with an array of add-on cables and accessories such as the GoFlex™ Net media sharing device and the GoFlex™ TV HD media player, that provide the flexibility to enjoy your content on a TV, a network, using a mobile device, or via the Internet.

All 1.5TB GoFlex ultra-portable drives are compatible with both the Windows® operating system and Mac® OS X computers. Each drive includes an NTFS driver for Mac, which allows the hard drive to store and access files from both Windows and Mac OS X computers without reformatting. The NTFS driver is simply installed once on the Mac® OS X computer, allowing it to read and write files on a Windows formatted4 drive.

The 1.5TB GoFlex ultra-portable drive with USB 3.0 adapter is available in black and can be purchased on Seagate.com and through select retailers for $249.99.

About Seagate
Seagate is the worldwide leader in hard disk drives and storage solutions. Learn more at http://www.seagate.com
[/spoiler]