Mitchel Resnick and team have developed a new tablet application called ScratchJr which has been specifically developed to help young children between the ages of 5 and 7 learn basic programming skills, creating their own interactive stories and games.

Within the ScratchJr application children are able to snap together graphical programming blocks to create character animations, making them dance, jump, move and sing. The characters can also be modified using the integrated painting editor and children can even add their own voices and sounds to their interactive story. 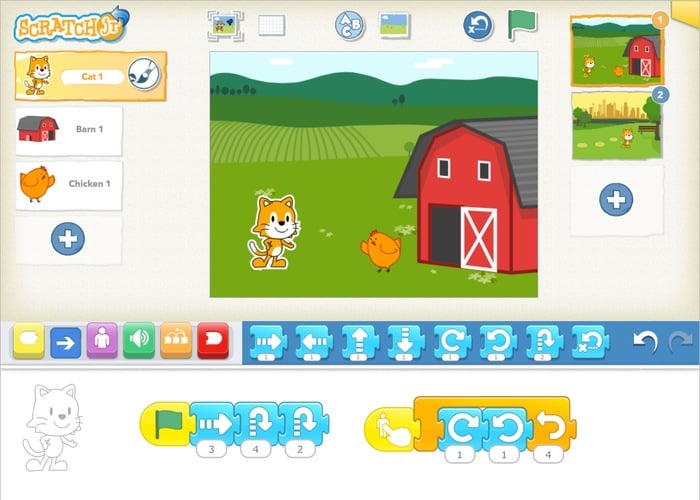 “Coding (or computer programming) is a new type of literacy. Just as writing helps you organize your thinking and express your ideas, the same is true for coding. In the past, coding was seen as too difficult for most people. But we think coding should be for everyone, just like writing.

ScratchJr was inspired by the popular Scratch programming language, used by millions of young people (ages 8 and up) around the world. In creating ScratchJr, we redesigned the interface and programming language to make them developmentally appropriate for younger children, carefully designing features to match young children’s cognitive, personal, social, and emotional development.”

As young children code with ScratchJr, they learn how to create and express themselves with the computer, not just interact with it. In the process, children develop design and problem-solving skills that are foundational for later academic success, and they use math and language in a meaningful and motivating context, supporting the development of early-childhood numeracy and literacy.”

The ScratchJr project is currently over on the Kickstarter crowd funding website looking to raise enough pledges to make the jump from concept to production. So if you think ScratchJr is something your children could benefit from or even yourself, visit the Kickstarter website now to make a pledge and help ScratchJr become a reality.