And by anywhere, we mean ANYWHERE. Whether it’s your living room, kitchen, bathtub, or down the hall after you’ve been kicked out by the landlady. Okay, that’s too extreme. The Sasan Magic Carpet, though barely resembling a carpet, is a foldable ultra-thin mattress that’s configured according to the user’s needs. 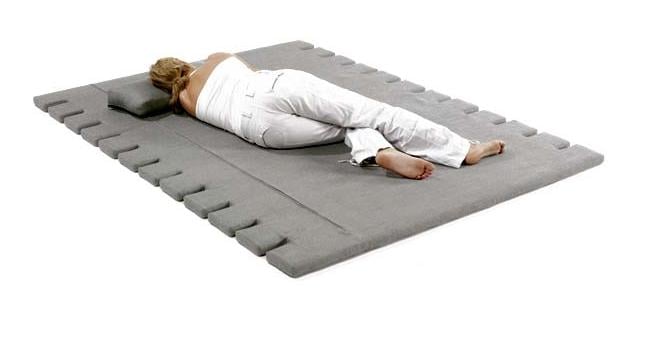 Though hyped as a magic carpet, the Sasan is incapable of flight and is not aerodynamic. It’s also being touted as a carpet, upholstery and Swiss knife all in one. That’s a tall order. The Sasan, however, is up to the task. See those ridged edges? Looks like it’s possible to fit one Sasan to another—that would make a Sasan house.

A creation of the Alexander Munk Design Bureau, the Sasan might very well become a bestseller among the homeless. It’s possible to fold the Sasan a dozen different ways. This means aside from the design conscious, homeless vagrants (who have some cash to spare) are part of the Sasan’s market. In fact, you can make a crude shelter out of it.

It’s not as if we’re advocating homeless vagrancy. It just occurred to us. Besides, we’re living in uncertain economic times.

Apparently, the Sasan is a concept. At least we think so because pricing is unavailable. The Sasan would work though. Think people who stay in the office for days on end and college students; also music festival goers.