With the launch of Windows Phone 8 happening some time in the fall, a number of manufacturers are working on new Windows Phone 8 smartphones, one of those is Samsung and now two devices have been revealed in some recent court documents in the Apple and Samsung trial.

The two new Windows Phone 8 devices are the Samsung Macro and the Samsung Odyssey, which you can see referenced in the photo below, which also has some specifications for each device. 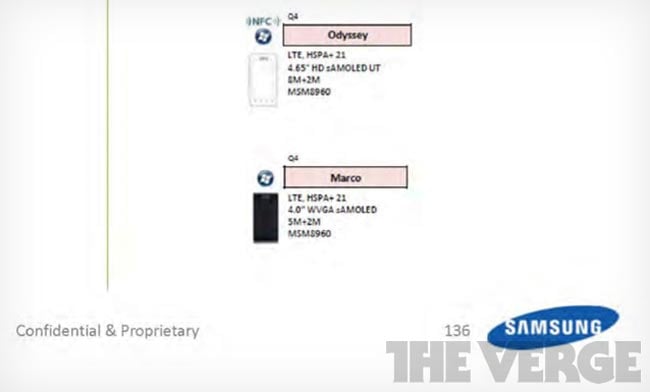 The Samsung Macro will be an LTE Windows Phone 8 device that will come with a 4 inch WVGA Super AMOLED touchscreen display, plus a dual core Qualcomm MSM8960 1.5GHz processor, a 5 megapixel rear camera and a front facing 2 megapixel camera.

The Samsung Odyssey will also be an LTE device, with a 4.65 inch Super AMOLED HD display, processing is provided by a a dual core Qualcomm MSM8960 1.5GHz processor, and there is an 8 megapixel rear camera and a front facing two megapixel camera.

The devices are expected to be launch in quarter four of 2012, probably around the same time as Microsoft launches Windows Phone 8, as soon as we get some more details we will let you guys know.