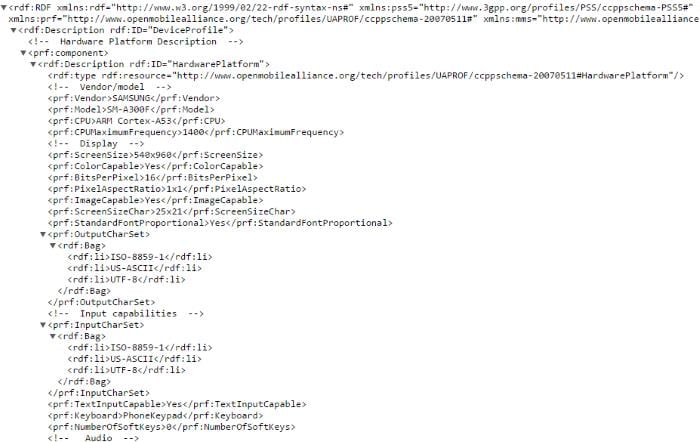 Rumors suggest Samsung is working on two more handsets, SM-A300 and SM-A700. Recently, the alleged SM-A300 was spotted on Samsung’s website, which is believed to be a low-end offering from the Korean OEM, but with impressive specifications.

The alleged device was spotted in the UAProf, revealing some of the specifications the handset will bring on the table, including the latest 64-bit Qualcomm Snapdragon 410 chipset featuring four Cortex-A53 cores and the Adreno 306 GPU. What’s more surprising is the rumored specifications for the SM-A500 includes a lower chipset, the Snapdragon 400, which we’re assuming will be upgraded to the Snadpragon 410 in the final version.

Additionally, the listing also reveals the alleged handset will come with a 540 by 960 pixels resolution, which is definitely entry-level. Other rumored specifications, as per leaked benchmarks, include 1GB of RAM, 8GB of expandable storage, 7MP camera for photos and videos, 5MP front-facing camera, and should come with Android 4.4.4 KitKat as its operating system out of the box.

The new A-series handsets are said to hit retail shelves by the end of the third quarter of 2014. Well, let’s just take this with a pinch of salt since Samsung didn’t reveal its plans about any new devices. We’ll update you as soon as we get any information.