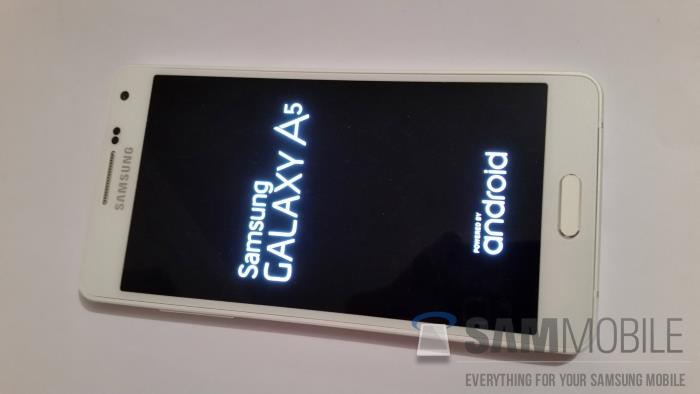 Samsung Galaxy Alpha came up with a new design language, and a big change from the Korean OEM. Since then, we’ve heard rumors that the company is working on more handset, which will see the daylight under the “A” series.

We heard Samsung is working on three handsets with model numbers SM-A300, SM-A500 and SM-A700. Recently, the folks at SamMobile posted some images of the alleged Samsung Galaxy A5 (SM-A500).

Last we heard, the handset was spotted in TENAA, a Chinese regulatory authority, and today, a number of leaked images shows the design of the alleged handset. It’s not surprising to be honest, and follows the same design cues as the Galaxy Alpha with a metallic frame, but not very premium since it’s a mid-range offering from Samsung. Previous rumors hinted that it will come with a full metal body, but it seems that’s not the case, also confirmed by SamMobile’s insiders.

Based on rumors, the alleged device will come with a 5-inch display sporting a resolution of 1280 by 720 pixels resolution, a quad-core Snapdragon 400 processor, 2GB of RAM and 16GB of storage which will come with a microSD card slot should you ever need extra storage.

Other features include a 13MP camera for photos and videos, 5MP front-facing camera, a 2,330 mAh battery and Android 4.4 KitKat with the new TouchWiz UI as seen on the Samsung Galaxy Note 4.

There’s no official word from Samsung about its existence, but we’ll update you as soon as we get any other information.