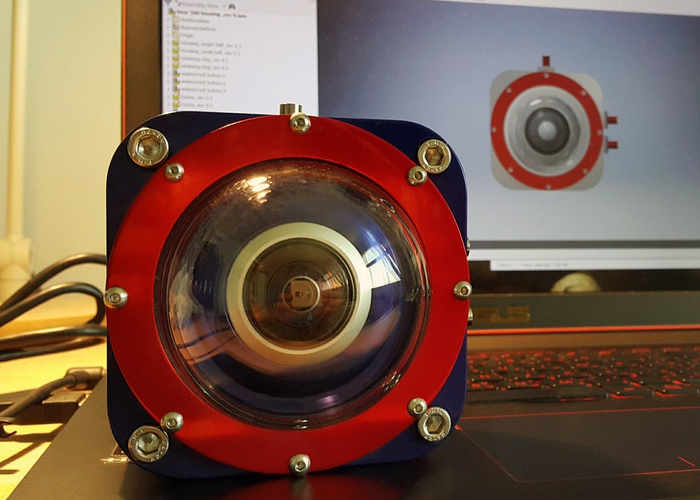 – Professional housing for commercial and consumer use
– Access to all buttons
– Screen is viewable during dive
– Waterproof to 100 meters
– Made from high grade aluminum and acrylic or lexan domes
– Machined Aluminium housing 6061-T6.
– Ultraclear domes in acrylic or polycarbonate (made in America!).
– All buttons work. Buttons are made from stainless steel, with an o-ring on both sides.

Domes are an absolute necessity for underwater 360. With flat covers the image is distorted due to the refraction of light as it travels through water. When shooting with a flat port, you lose some of your field of view and the image can be magnified up to 33%. This makes it virtually impossible to stitch underwater 360 with regular flat ports. Using very tiny dome ports that are close to the lens presents another problem…focus. Whilst underwater, a camera is not focusing on what you are videoing, rather a virtual image that is projected onto the dome itself. This means that the closer the dome is to the lens the more difficult it can be for the camera to focus as the “image” is extremely close to the lens.

The Samsung Gear 360 Dive Housing is now available to backfire Kickstarter with pledges from $290 for earlybird backers with delivery expected to take place before the end of 2017. Jump over to the official Kickstarter campaign page by following the link below for more details.