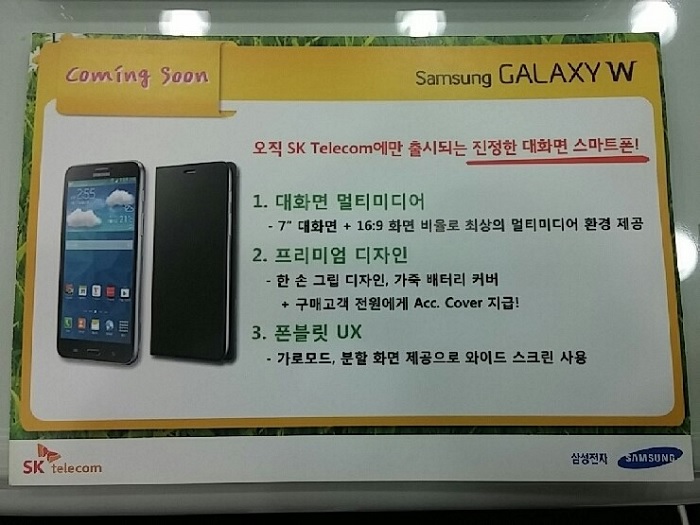 Last month, a gigantic 7-inch handset was certified by Tenaa which came with a monstrous 7-inch display, with an earpiece hinting that it might be an oversized phone.

We’ve seen rumors that Samsung is working on the successor of the oversized Galaxy Mega, which will come with a SM-G750 model number. However, it seems the handset spotted on TENAA may launch as the Galaxy W in the company hometown.

It’s believed to be a variant of the Samsung Galaxy Mega 2, which will launch on SK Telecom in Korea in the coming weeks, as shown in the leaked flyer above. The device, if it’s the same one spotted on TENAA, should pack a massive 7-inch display sporting a resolution of 1280 x 720 pixels.

Other rumored features include a quad-core processor clocked at 1.2GHz, 1.5GB of RAM, 8GB of storage with a microSD card slot, 8MP camera for photos and videos, 2MP front-facing camera, and should come with Android 4.4.2 KitKat as its operating system.

There’s no confirmation if the device is the same SM-T2558 as seen on TENAA so a proverbial amount of salt is required. We’re hoping things will clear up when the handset hits retail.