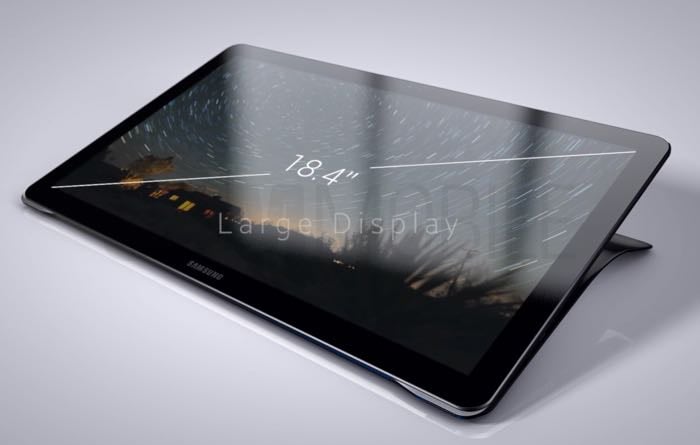 Even before Samsung has officially unveiled their new Samsung Galaxy View tablet that is equipped with an 18.4 inch screen. The Adorama website has started taking pre-orders for the massive tablet which is priced at $599 on their website.

As you might expect Samsung has not officially confirmed this pricing as yet, and is sure to shut down the pre-ordering, that has happened ahead of its official unveiling of the Android tablet, that is expected to take place very soon.

To recap the 18.4 inch Android tablet is equipped with a full HD display and powered by the octa-core Samsung Exynos 7580 processor supported by 2GB of RAM together with 32GB of internal storage. That can be expanded further with the use of an included microSD card slot with support for up to an additional 128 GB of removable storage.

Other features of the Samsung Galaxy View Android tablets include a 64 Wh, 5,700 mAh battery as well as a 2.1 megapixel front facing camera and connectivity provided by 802.11ac WiFi and Bluetooth 4.1 all running Google’s Android Lollipop software.

As soon as any pricing is confirmed by Samsung we will keep you updated as always.