According to a leaked internal document, Verizon is set to launch the Galaxy NotePro 12.2 as well as the LG G Pad 8.3 on its network next week, that is, March 6th. 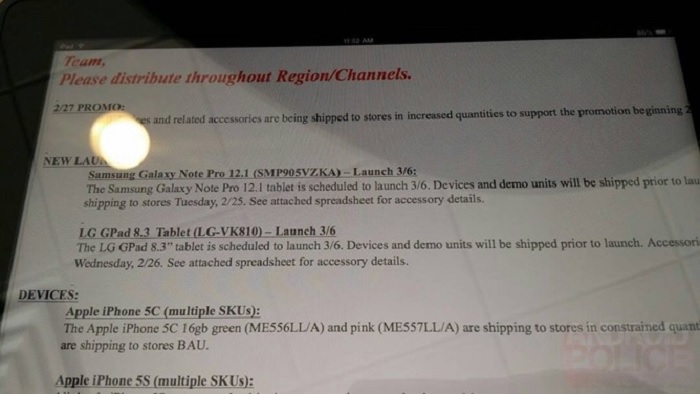 The leaked memo clearly shows the launch date of both tablets, and its good to see Verizon kicking off things in a timely fashion for these tablets. Obviously, there’s no word if the leaked memo is legit or not, but let’s just take it with a pinch of salt and hope it’s correct.

For those of you who can’t recall, Samsung Galaxy NotePro 12.2 comes with a 12.2-inch WQXGA Super Clear LCD display boasting a resolution of 2560 x 1600 pixels. The tablet is powered by a quad-core Snapdragon 800 chipset with a clock speed of 2.3GHz for the LTE version, while the 3G/Wifi enabled tablet comes with a Exynos 5 Octa (1.9 GHz QuadCore ＋ 1.3 GHz Quadcore).

Other features include 3GB of RAM, 32/64GB storage options with microSD card support of up to 64GB, 8MP rear camera, 2MP front-facing camera, a massive 9,500 mAh battery and runs Android 4.4 KitKat with Magazine UX pre-installed out of the box.

We’ll update you as soon as the tablets are available for sale.