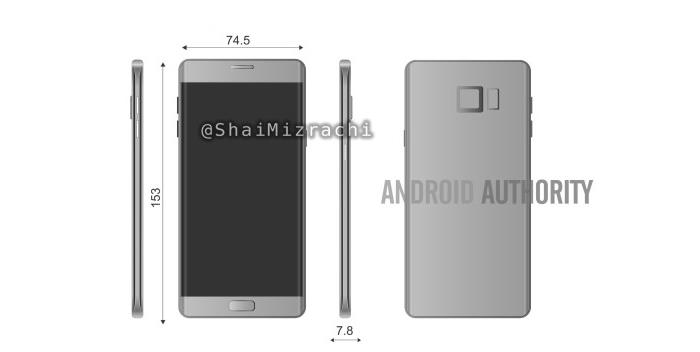 Samsung is rumored to launch the upcoming Galaxy Note 6 slightly earlier than the company’s traditional launch cycle in August instead of the company’s usual IFA launch.

As the launch date draws closers, it’s quite obvious that we’re going to see more and more leaks related to the handset. Recently, a press render of the upcoming Galaxy Note 6 (pictured above) made its way on to the internet revealing a handful of useful information.

As you can see clearly from the leaked render, the upcoming Galaxy Note 6 is expected to come with a dual-edge display, similar to to the Galaxy S7 edge, and will be 7.8mm thick, slightly more than the last year’s Galaxy Note. The handset measures 153mm tall and 74.5mm wide.

Rumors suggest the Samsung Galaxy Note 6 will come with a 5.8-inch display sporting a resolution of 2560 by 1440 pixels, Qualcomm Snapdragon 820 processor paired with 6GB of RAM, 12MP camera for photos and videos, and Android 6.0 Marshmallow pre-installed out of the box.

There’s no official word from Samsung so take this with a grain of salt. There’s a possibility that the image is fake, but that’s the best we have right now. We’ll update you as soon as we get to hear anything more.