It looks like we have some confirmation that the new Samsung Galaxy Note 3 will launch with a quad core 2.3GHz Qualcomm Snapdragon 800 processor.

The following photo is from a slide shown at a press conference which was recently held by KT Corporation (KT Telecom), the conference was about broadband LTE. 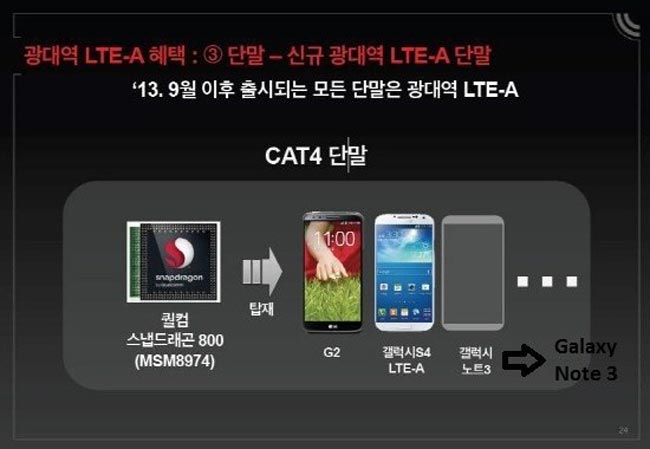 According to the guys over at Gforgames, KT Corporation confirmed at the event that the new Samsung Galaxy Note 3 will use the quad core Qualcomm Snapdragon 800 processor.

The conference has been centered around “broadband LTE” and when talking about LTE Advanced and the Snapdragon 800 SoC, the carrier also mentioned the Galaxy Note 3 along with the LG G2 and the Samsung Galaxy S4 LTE-A.

The Samsung Galaxy Note 3 will come with a 5.68 inch Super AMOLED full HD display with a resolution of 1920 x 1080 pixels, plus 3GB of RAM and a choice of either 32GB or 64GB of built in storage,and a microSD card slot.

The Samsung Galaxy Note 3 will come with a 13 megapixel camera with optical image stabilization and a range of other advanced features, plus Samsung’s eye tracking technology in the form of smart pause and smart scroll.