We’ve quite a lot about Samsung working on a bunch of lite versions for its devices, including Galaxy Note 3 Lite, Galaxy Grand Neo aka Grand Lite and Galaxy Tab 3 Lite. We’ve already seen some leaked specifications of the Galaxy Grand Neo.

Now, we have some more details about what we could expect from the lite version of Galaxy Note 3,which is also dubbed as Samsung Galaxy Note 3 Neo. In the past, we’ve heard rumors that it will pack a 720p display, but now, we have more information about what it could bring at the table. 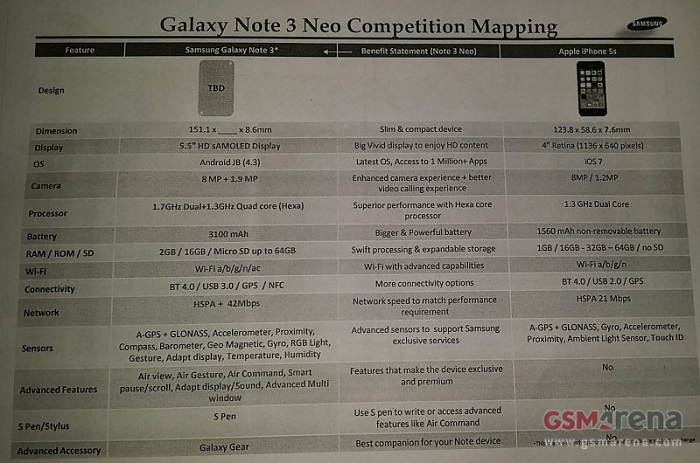 After taking a look at the spec sheet, it looks more like a Note 2 refresh than a lite version of the flagship phablet from the Korean OEM. It packs the same 5.5-inch HD Amoled display with 2GB of RAM and 16GB storage on board with a microSD card slot of up to 64GB. On the rear, it comes with a 8MP camera for photos and videos, as well as a 1.9MP front-facing camera.

Other features include WiFi, Bluetooth 4.0, 3,100 mAh battery, S Pen features, Galaxy Gear compatibility and runs Android 4.3 Jelly Bean out of the box. The major difference we could spot between the Galaxy Note 3 Neo when compared to Note 2 is the processor. It lists a 1.7GHz dual + 1.3GHz quad-core (Hexa) processor under the hood to power the device. Take a look at the images below.

In terms of launch, rumors suggest the alleged handset will make an official appearance at the Mobile World Congress 2014 next month, where Samsung is reportedly going to launch a bunch of other handsets as well. We’ll update you if anything else comes up.