Many Galaxy S4 users were disappointed with the fact that the Snapdragon 800 powered beast was later released for South Korean audience. If you dont know, Galaxy S4 is announced in different versions: GT-I9500 that is powered by Exynos along with GT-I9505 that features Snapdragon 600 SoC. A new leak suggests that Samsung will unveil Galaxy Galaxy S4 (GT-I9506) with LTE powered by Snapdragon 800 with a clock speed of 2.3GHz, similar to the one that was released in Korea. 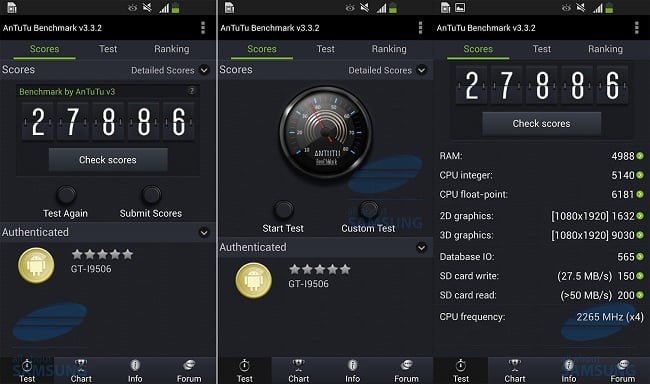 Thanks to the folks at AllAboutSamsung, we can say that the LTE-enabled Galaxy S4 will hit the European markets as well. The folks ran some AnTuTu benchmarks on the pre-production device, so we will just skip the values for now and focus on the important thing i-e the chipset. The benchmarks reveal that the device does feature a Snapdragon 800 chipset, while the rest of the specifications seem similar to other Galaxy S4 variants. 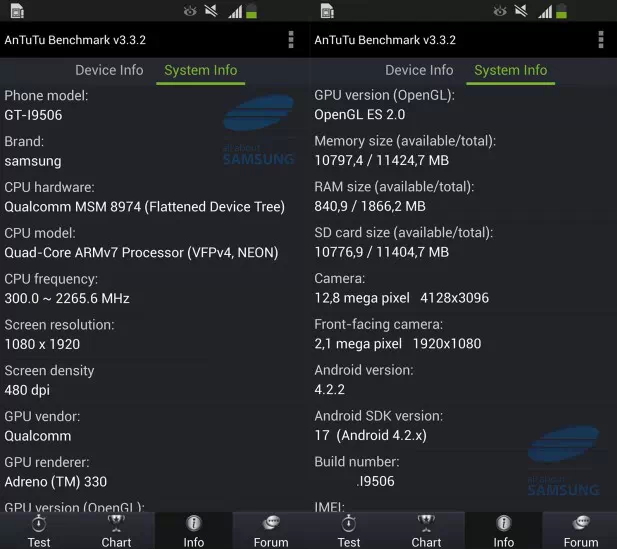 At the moment, we don’t know when this device will hit the market. Rumors have it that the device will be launched at IFA alongside the much awaited Galaxy Note III but we doubt it, Samsung can release a little earlier though in order to counter LG’s flagship smartphone – G2.

Although we are not sure about the launch date, the only thing we are sure about is its price. It will definitely be expensive that the Snapdragon 600 version of the Galaxy S4. But its just our prediction, Samsung may offer the device within the same price range as other S4 variants, we don’t know. Let’s wait for an official announcement by the Korean giant.