The rumor mill is working at its full capacity to release more and more details about the upcoming flagship devices. Earlier today, the infamous Twitter leaker @evleaks, posted a tweet showing the screenshots of the AnTuTu benchmarks of the Samsung Galaxy Note 3 as well as the “About” screen. Surprisingly, he also posted some specifications of the device as well. 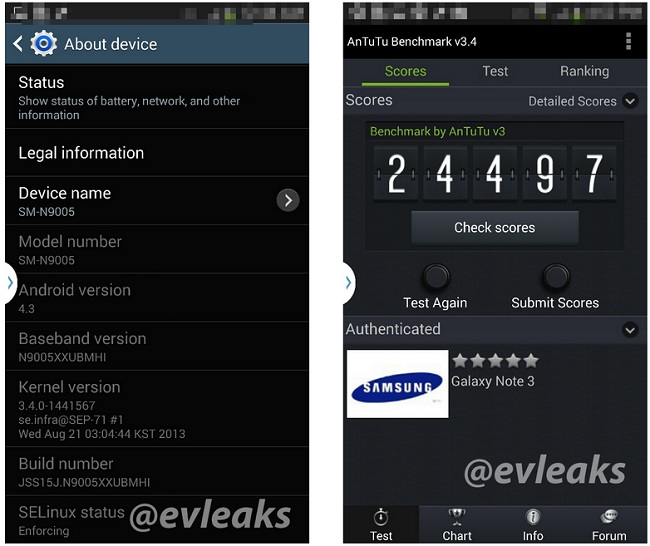 The About screen shows us something we already know. Samsung Galaxy Note 3 will come with Android 4.3 Jelly Bean with build number JSS15J with model number SM-N905, as shown in the screenshot above. A number of rumors suggest that this model number belongs to the Snapdragon variant of the device.

Coming over to the benchmark results, the alleged Samsung Galaxy Note 3 managed to score 24,497 points on AnTuTu. However, I’d suggest you don’t take the result very seriously as it is hard to judge the capabilities of the device based on one test.

Interestingly, the things that are of more interest to us are the specifications leaked by @evleaks. Almost all the rumors suggested that the device would come with 3GB of RAM, but evleaks suggests otherwise. According to the notorious leaker, Samsung Galaxy Note 3 will come with 2.5GB of RAM onboard. Other specifications of the alleged Samsung Galaxy Note 3 SM-N9005 include a quad-core 2.3GHz processor and a display featuring 1920 x 1080 pixels resolution.

Just take this rumor with a grain of salt as everything will come to light tomorrow at the Samsung Unpacked Event in Berlin. Stay tuned.