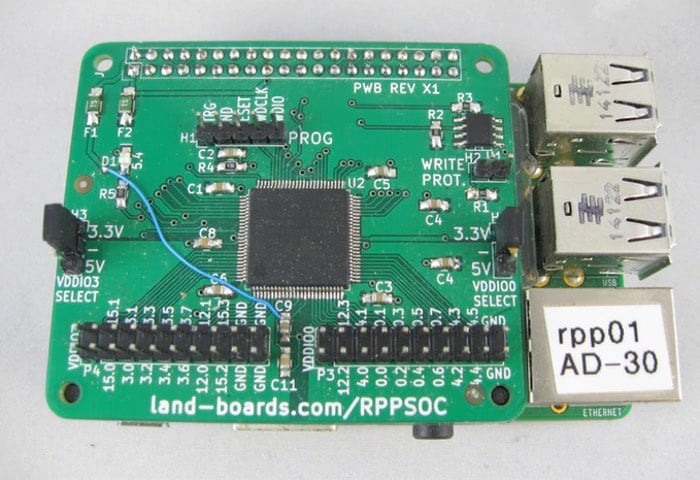 Doug Gilliland has once again taken to the Kickstarter crowdfunding website to raise funds for a new system on a chip has created for the awesome Raspberry Pi mini PC system.

The hardware has been named RPPSOC and takes the form of a system on a chip (SOC) on a Raspberry Pi Hat and allows you to add features that are normally associated with the Arduino platform as well as additional analogue inputs or outputs and consistent I/O timing to name a few.

Check out the video below to learn more about the inspiration behind the SOC Raspberry Pi Hat and its features and functionality. Doug explains a little more :

Do you love the Raspberry Pi as much as we do? Do you wish it had some features that are in an Arduino? How about adding some Analog inputs or outputs? What about consistent I/O timing so that you can interface to devices like NeoPixels? Wouldn’t having some 5V I/O be wonderful for some of those legacy interfaces?

If that sounds interesting to you, then this is the Raspberry Pi hat that you need. This card sits on your Raspberry Pi and provides an incredible number of features. RPPSOC is a Programmable System on a Chip. The beauty of the Cypress part is that it includes both analog and digital logic which can be programmed to be whatever you want it to be. In addition, you get a 32-bit ARM processor.

Specification for the new Raspberry Pi HAT include :

For more information on the new SOC Rasp Pi Hat jump over to the Kickstarter website for details and to make a pledge via the link below. If you found this article interesting you might also be interested in this list of awesome Raspberry Pi Zero projects we have put together.