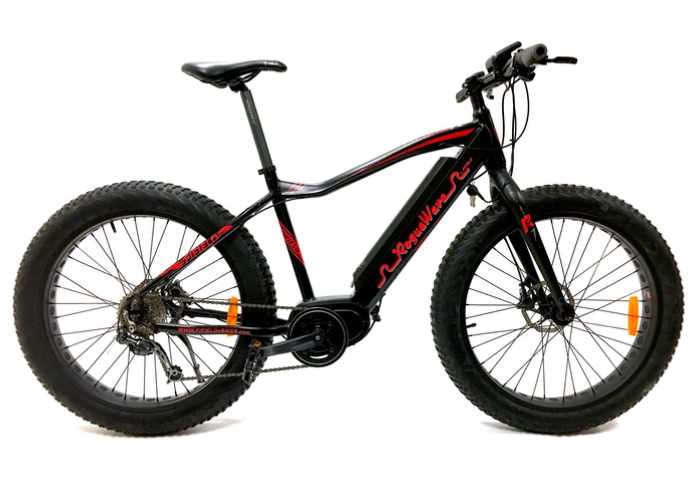 Rogue Wave is a new flat tyre electric bike which has been created by Fifield E-Bikes and provides a 40-mile range allowing you to cycle almost anywhere whether it be on a mountain trail, the beach or just around town.

Watch the promotional video below to learn more about the Rogue Wave which is now available via Kickstarter with pledges starting from $1399 for the Rogue Wave Mid Drive, for early bird backers, with shipping expected to take place during May 2017 throughout the US.

The developers of the Rogue Wave explain more about its inspiration and design.

We all love to eBike to work at Fifield HQ in Hingham, MA, but New England winters presented us with a bit of a challenge. We stepped up to the plate, and The Rogue Wave was born for you to enjoy everywhere, year-round.  The Rogue Wave is Fifield Electric Bikes’ first all-terrain eBike. With a powerful motor, 40 mile range, and fat tires, you can pedal faster, longer, without breaking a sweat.

The industry has given us folding bikes, cruisers, commuter bikes, and mountain bikes, but nothing as versatile as the Fifield Rogue Wave- an eBike that does it all without sacrificing anything. The enjoyment of a folding bike, commuter, or cruiser ends where the pavement does. The Rogue Wave can take you absolutely anywhere you need to go- getting you twice the use and twice the fun!

The Rogue Wave is a commuting warrior. Riding to work allows you to skip traffic, avoid crowded subways, and save money on cabs all while enjoying fresh air, zero delays, and zero sweat.  The Rogue Wave is also a weekend warrior. Our all-terrain fat tires and e-assist will take you on any after-hours adventure whether it’s to the trails, the beach, or the snow.

The rider can determine whether they want to have a traditional bike ride experience using the 9 speed Shimano gear system, or turn on pedal assist in levels 1-5 for an electrically-charged ride. Either way, “it’s as easy as riding a bike.” The Rogue Wave utilizes pedal assist, coupled with torque sensors. This means our bike senses how hard you’re pedaling, and then matches that output, giving you the boost you need to flatten those hills.

To make a pledge to be one of the first to own a Rogue Wave fat tire electric bike jump over to the official Kickstarter crowdfunding campaign page via the link below.