Hand’s down the worst part about playing Rock Band to me is having to clean up all the controllers when you are done. I try to keep the stuff upstairs out of my way, but bringing it down to play the next time is a big pain. If you need a better way to store your Rock Band gear LevelUp has your device. 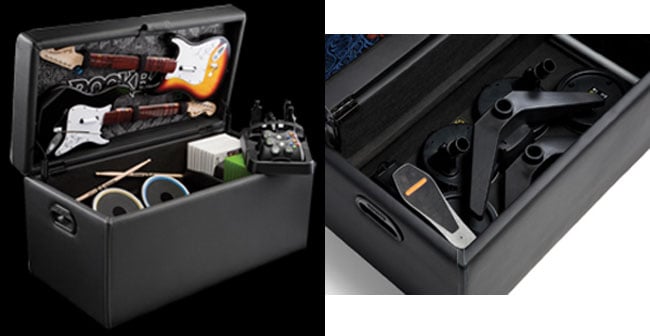 The thing is called the Rock Band Storage Ottoman. It’s a wood construction ottoman with faux black leather for the cover. It has Velcro loops under the lid for two guitar controllers. The drum kit stores in the bottom once disassembled.

There are other pockets on the inside of the ottoman for storing the drumsticks and the microphone. You can add trays that are designed to hold video games and normal controllers from the game console. You can get the black version called Back in Black for $89.99 at Costco.