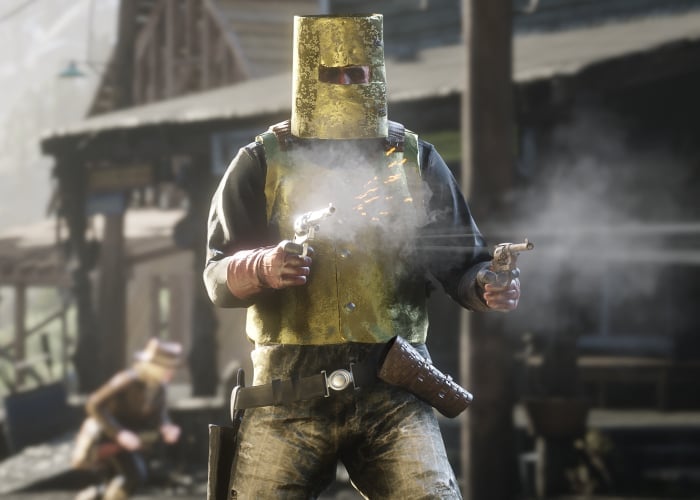 Rockstar Games has this week announced that the next major update to the Red Dead Online Beta will roll out on February 26th, 2019 ringing with it new modes and world enhancements for players to enjoy. Next week the Red Dead Online Beta frontier will expand further with the addition of new Free Roam Events, new Showdown Modes and new Races explains its developer in their latest update.

“New additions will include the Fool’s Gold Free Roam Event, where players will compete to control an equal parts gaudy and protective suit of Golden Armor. Fight to take down the armor wearer to earn points and claim it as your own, then turn the tables and earn points for kills while wearing the armor.

Competitive Challenges gets a fresh catch with Fishing Challenges. Fishing Challenges are broken out by type, opt in to the challenge and you’ll receive all the equipment necessary to compete including the rod as well lures and bait specific to the challenge type, whether it’s crickets for a river challenge, crayfish for the swamp or worms for lakes. Then head to an appropriate body of water to take part – also, you’ll be made safe from the nuisance of trigger-happy outlaws while you are taking the challenge. Catch the highest weight total of fish to win.

Also on the way are three new Showdown Modes where players and teams compete to capture and deliver bags, steal loot from each other and survive. Stay tuned for more details around Up in Smoke, Spoils of War and Plunder. Races will also see a new variation with Target Races where players shoot targets from horseback to pass checkpoints as they race along a track to the finish line.”

For the complete update listing all new enhancements changes and modes jump over to the official Rockstar Games news site for more details.