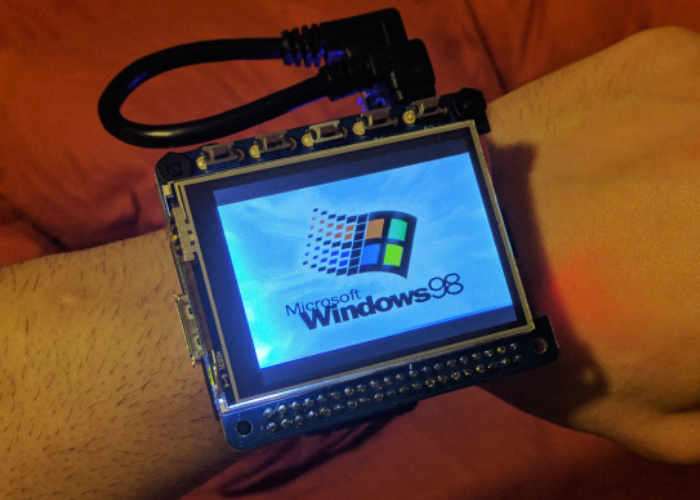 If you’re not sold on the range of smart watches currently available from the likes of Apple, Samsung and others, you may like to build your very own using the awesome Raspberry Pi mini PC, Just like 314REACTOR.

As you can see from the image above the Raspberry Pi smartwatch is running Windows 98 which isn’t currently available for the Raspberry Pi. However its creator has used an emulator via popular virtual machine software QEMU to run the old Microsoft Windows 98 operating system on the Pi.

I have always had somewhat of a soft-spot for Windows 98, despite it driving me insane back in the day on my old Pentium II system with 64mb RAM and using some god awful on-board graphics. But these days I don’t HAVE to suffer it as my only source of computing; which, somehow makes me want to go back and use it – I’ve built my own dream Windows 98 PC that I like to fire up every now and then and I love it.

I also love emulation, the idea of running an operating system on virtual hardware? That’s awesome. It’s like the Matrix, or something. On top of this I love wearable/small tech and nowadays I have the ability to make things like this. So I thought, wouldn’t it be ridiculous and awesome to have Windows 98 on my wrist? I’ve done a few projects with Raspberry Pi’s and TFT screens that use the GPIO now so the hardware side was relatively painless, knock together a Pi A+, whack on the TFT and put the base of the case on the bottom and some screws and spacers in between to keep the TFT screen on nicely.

For more information on the new Raspberry Pi smartwatch jump over to the 314Reactor website for details by following the link below.

If you enjoy building Pi projects you might be interested in our comprehensive list of Raspberry Pi displays, HATS and small screens. Or if you are interested in building Arduino projects these may provide inspiration for your next project.