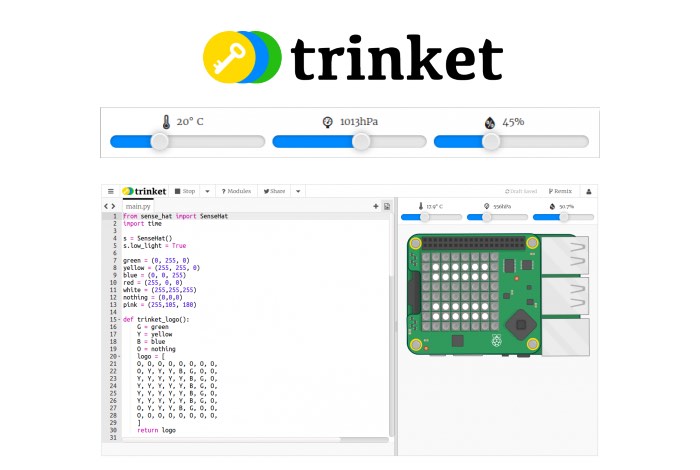 Over the past few months the Raspberry Pi Foundation has been working closely with startup development company Trinket, to develop a web-based emulator for the Sense HAT.

Today the Pi Foundation has announced the release and availability of the Raspberry Pi Sense HAT emulator, enabling those interested to participate in future Astro Pi competitions, as well as create code and programs without the need to own a Raspberry Pi mini PC or a Pi Sense HAT.

The Sense HAT has temperature, pressure and humidity sensors, and can change its behaviour according to the values they report. The Sense HAT emulator has sliders you can move to change these values, so you can test how your code responds to environmental variables.

Code written in this emulator is directly portable to a physical Raspberry Pi with a Sense HAT without modification. This means any code you write can be run by the Astro Pi units on board the ISS! It is our hope that, within the next 12 months, code that has been written in the emulator will run in space. Look out for news on this, coming soon on the Astro Pi site!

For more information on the new Raspberry Pi Sense HAT emulator and to give it a try, jump over to the Raspberry Pi Foundation website for details by following the link below.