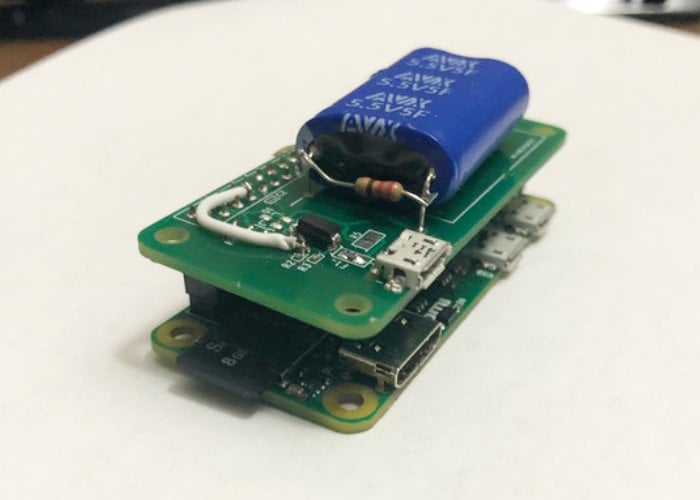 Raspberry Pi users may be interested in a new way to help shutdown their mini PC systems and prevent SD card corruption. when needed using the PiZ-SuperCap the Raspberry Pi mini PC can be shutdown softly thanks to the addition of a super capacitor.

Special early bird pledges are now available for the unique project from roughly $12 or £10, offering a considerable discount of approximately 30% off the final retail price, while the crowd funding campaign is under way. If the PiZ-SuperCap Kickstarter campaign is successful and production progresses smoothly, worldwide shipping is expected to take place sometime around February. To learn more about the PiZ-SuperCap project watch the promotional video below.

“We’ve all had unexpected shutdowns on our Raspberry Pi Zero. Whether its a loose chord, or your power going out, it leads to SD Card corruption which can lead to you losing valuable data! Simply put, no one likes unexpected shutdowns and loosing the programs and projects they have worked on. This is where the PiZ-SupCap comes in picture. Simply connect it straight out of the box via the 40 GPIO pins and plug in your USB Power cable to the PiZ-SupCap and you’re ready to go!”

“The Raspberry Pi will directly be powered through the USB connector via the 5V pins. However, hen the power is cut for whatever reason, the Pi Super Capacitator will take over and provide power for up to an additional 15 seconds. We can use the available 15 seconds to issue a soft shutdown command for a proper shutdown. “

When the power cable is supplying power, it is detects GPIO Pin #4 as a high level. When the power is pulled, the GPIO Pin will start reading LOW. Through this, we can create a program that instructs the Raspberry Pi to shutdown when GPIO pin #4’s state reads LOW. For a complete list of all available pledge options, stretch goals, extra media and technical specifications, jump over to the official PiZ-SuperCap crowd funding campaign page by following the link below.