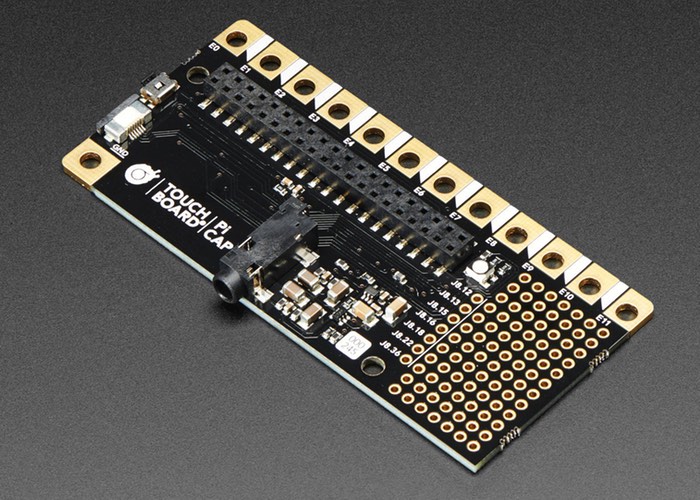 The new Bare Conductive Pi Cap designed to be used with the full range of Raspberry Pi mini PCs has now arrived at Adafruit and is available to purchase priced at $40.

The Bare Conductive Pi Cap is fitted with a 40 pin GPIO connector and supports Raspberry Pi A+, B+, Zero and later hardware and lets you connect anything to one of the 12 electrodes to control sounds, video and more.

The Pi Cap software is in the official Raspbian repository, so installing all the software you need is as easy as Pi. This also means you’ll get updates through apt-get, just like you do with the core Raspberry Pi packages. Hooray for Linux!

Features of the Raspberry Pi Bare Conductive Pi Cap include :

– High quality audio output
– Extensive tutorials and easy startup experience
– Powerful Python and C++ libraries so that you can include sensors in your project
– User-programmable RGB LED and multi function button
– Prototyping area with GPIO breakout to add additional sensors or buttons
– Works with Raspberry Pi A+, B+, Zero and later (Any Raspberry Pi with a 40 pin GPIO connector)

for more details on using the Bare Conductive Pi Cap jump over to the official website for tutorials and libraries via the link below. If you enjoy building Pi projects you might be interested in our comprehensive list of Raspberry Pi displays, HATS and small screens.