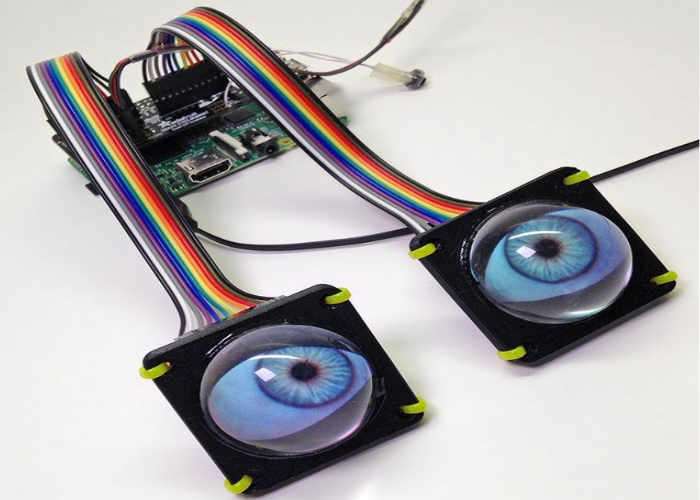 Maker and electronics developer Phillip Burgess has published details on how to create your very own pair of animated eyes which are perfect for cosplay masks, props or other robotic style projects you may have been mined.

The Snake Eyes Bonnet is a Raspberry Pi accessory for driving two 128×128 pixel OLED or TFT LCD displays which also provides for analogue inputs for sensors.

A Raspberry Pi 3 or Pi 2 is highly recommended, but the code will run on a Pi Zero or other single-core Raspberry Pi boards, although performance is affected and lag will start to appear. Philip explained a little more about the potential benefits and downsides to using the Raspberry Pi Zero mini PC

Potential benefits:
• Hardware-accelerated 3D graphics (OpenGL), including antialiasing.
• A faster CPU, ample RAM and dual SPI buses could yield faster frame rates.
• Standard graphics formats like JPEG, PNG and SVG can be decoded on the fly; no preprocessing step.
• The eye rendering code is written in a high-level language — Python — making it easier to customize.

Possible downsides :
• Raspberry Pi takes time to boot an operating system off an SD card, whereas Teensy is instant-on with all code in flash memory, . The Pi also requires an explicit shutoff procedure.
• The Raspberry Pi is not as suitable for wearable applications…it’s larger, uses more power, and the SD card makes it less rugged.

For more information on the awesome Snake Eyes Bonnet Raspberry Pi accessory jump over to the Adafruit website for details by following the link below.  If you enjoy building Pi projects you might be interested in our comprehensive list of Raspberry Pi displays, HATS and small screens.