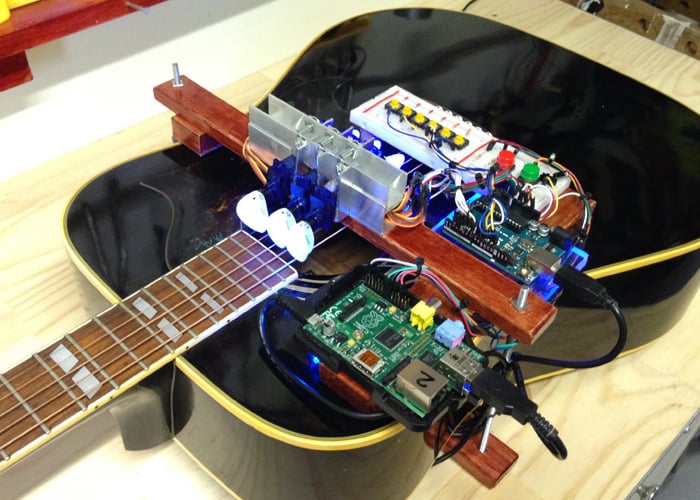 Anyone looking for a more unique way to manage their network logs and scan for problems or issues, may be interested in a new guitar that has been modified to be powered by an Arduino and Raspberry Pi set up.

The Raspberry Pi powered guitar then plays a tune as it reads the network logs creating a tune depending on the notifications that are contained within the code. Watch the video below to see how the guitar performs reading firewall logs.

Its creator explains a little more about the issues involved with creating such a musical setup.

“To begin, the servo rig needs to be just right. It has to be stiff enough so as not to move, whilst still allowing the pick to be adjusted up, down and sideways so as to position the tip of the pick just so; critically plucking just enough string whilst remaining at the right angle & depth so as to stay clear & not get stuck – or it would never pluck the string at all.

The picks themselves are real guitar picks which are bent so the pick point is parallel to the strings, with the relatively soft, rather than the harder picks being better for plucking the strings. The picks are affixed to the servo horns by a screw at the pivot and a small pin made from a piece of copper (from a cat6 data cable), which when inserted through the end of the horn and the pick, acts like a staple, thus making the servo and the pick one element. The servos are siliconed to small aluminium angles with slotted holes filed in the top to allow adjustment.

Another important part is the control architecture and getting the Pi and Arduino co-ordinating as intended, with each of these devices being better suited for certain tasks. For example, the Arduino is better at doing proper PWM (Pulse Width Modulation) which is required to control the position of servos, whilst the Pi offered a familiar Ubuntu/Python programming environment, wireless access for NTP and ssh, additional GPIOs and the flexibility to develop the code. The Pi is also used as a platform to write the Processing sketch which is then uploaded to the Arduino itself via the command line Arduino IDE ‘ino’. Communication between the Pi and the Arduino is done via a serial connection.”

For full instructions on how to build your very own network log playing guitar using the Arduino platform and the awesome Raspberry Pi mini PC jump over to the Data Viz website for details on the set and full instructions together with plenty of other videos showing the network guitar in action.