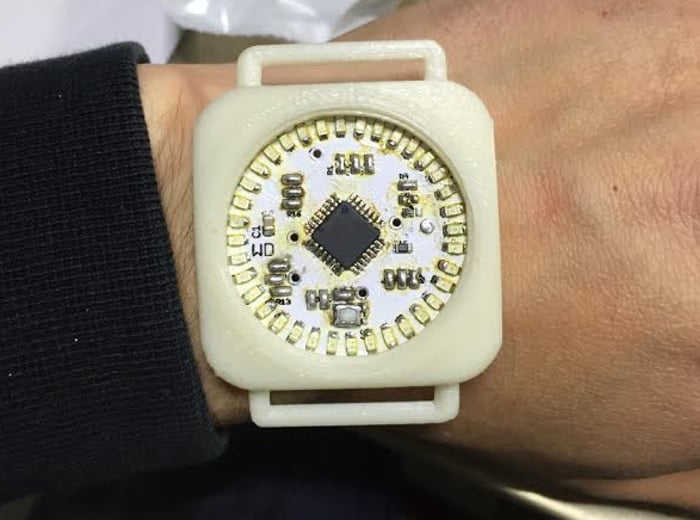 If the Apple Watch or other smartwatches are not for you, then you might be interested in this awesome Arduino LED watch that has been 3D printed and inspired by the Solder Time II watch.

The Arduino watch has been created by Alessandro Matera and can be seen in action in the video below complete with 3D printed case that was created using a desktop 3D printer.

The design is smaller than the Solder Time II and is fitted with LEDs around the side and uses Arduino to directly manage the 32.768KHz crystal without using the RTC chip. Its designer Alessandro Matera explains :

“At the beginning, I had to change the CR2032 battery every day, even if the watch goes in power save when not in use. I was going crazy! After checking and checking again the code, I’ve found that I’ve inserted the power save instruction in the wrong place and the watch never went in power save!”

“Alessandro knew he wanted his watch to have a nice holder, so he took advantage of a 3D printer at his FabLab in Catania, Italy. For now the watch is not very protected, so he wants to create an opaque plexiglass for the top, and also print a holder that will allow for a standard sized watch band.”