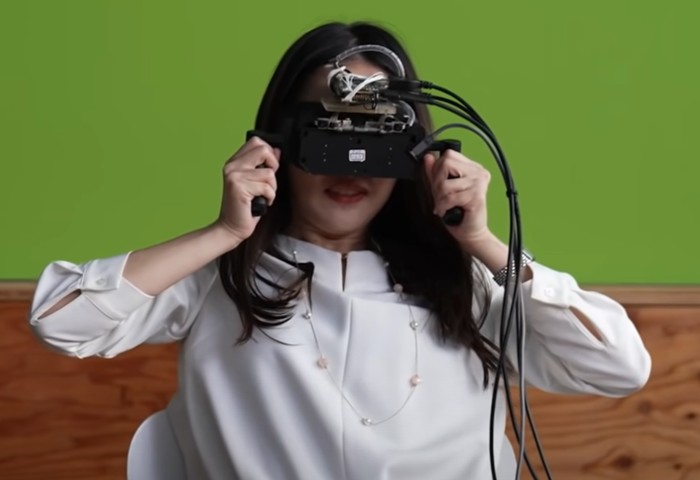 Sony has this week teased a quick demonstration of its virtual reality (VR) head-mounted display or HMD, capable of projecting a high-definition 3D environment achieving a high-resolution of 4K with one eye and when both Isa combined an impressive 8K resolution. Unfortunately the VR headset is just in the prototype stages of development but could be a steppingstone to the next PlayStation VR 2 headset which is currently under development at Sony.

The VR headset technology was demonstrated and showcased during the Sony Technology Day showcase the company highlighted new technology from across its various businesses.

“This is a virtual reality (VR) head-mounted display (HMD) that projects a high-definition 3D space and achieves a high-resolution of 4K with one eye and 8K with both eyes. High image quality is achieved through multi-pixel and miniaturization using fine processing and advanced packaging technology cultivated through the development and manufacture of CMOS image sensors, and Organic Light Emitting Diode (OLED) microdisplay using device and circuit technology cultivated through the development of displays.”

” The processing time is reduced by decreasing the amount of latency throughout the entire system thanks to the integration of data from multiple sensors. The person watching in VR can experience high-definition images in real time according to the movement of his/her head. In addition to industrial applications, the OLED microdisplay is expected to be used in the entertainment field, as it can express the texture of materials and human expressions in high-definition in real time based on movements of the viewer’s head.”

Full specifications for the VR headset and technology incorporated have not been released by Sony has yet but as soon as more information becomes available on the rumoured PSVR 2 hardware we will keep you up to speed as always.