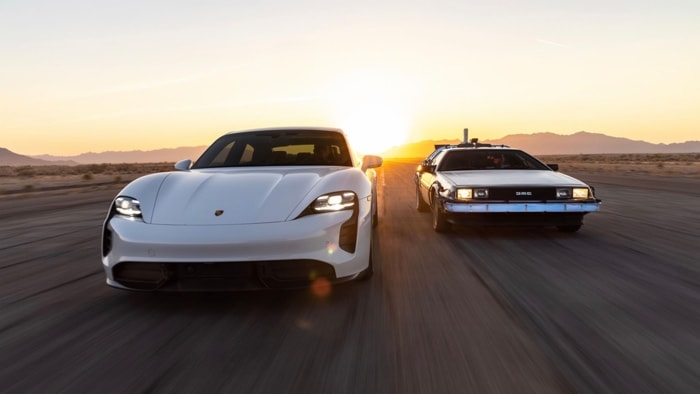 Yesterday was Back to the Future Day and Porsche celebrated the event with a new video featuring the DeLorean from the movie and of course a Porsche Taycan.

Between the Electrify America and the European Ionity charging network, 1.21 gigawatts of combined power has been exceeded for the first time. The rapid expansion of both networks means they now represent the largest DC fast charger networks in the US and Europe. An additional range of third party publicly available charging networks complements the total. There are currently 670 Electrify America and 372 Ionity locations and counting – which equates to more than 4,800 individual chargers. With the network containing more power than ever before, charging a Taycan is quicker and easier.

In just 22 minutes, the Porsche Taycan can charge from five to 80 per cent, thanks to its 800-volt battery architecture and 270 kW charge speed – meaning less time spent charging and more time travelling. Additionally, with Plug-and-Charge – which must only rank second in convenience to Mr Fusion, the power source of the DeLorean time machine in the blockbuster film Back to the Future – the user simply plugs-in and charging starts automatically, just as the name suggests.

You can find out more details about about the Porsche Taycan over at Porsche at the link below.