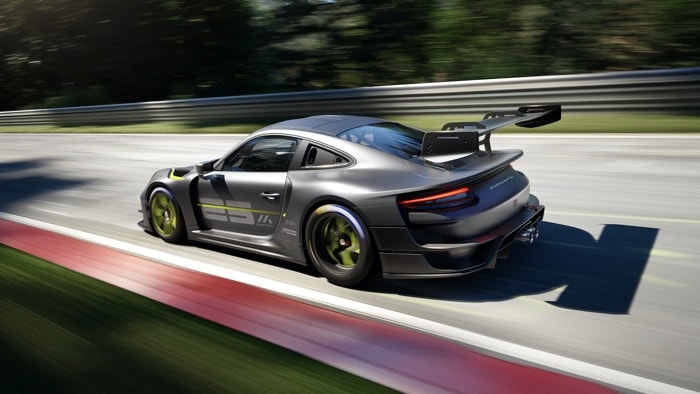 The new Porsche 911 GT2 RS Clubsport 25 was made official last week, the car is limited to just 30 cars and it launched to celebrate 25 years of Manthey-Racing GmbH.

Now we get to see this unique version of the Porsche 911 GT2 on the track as Porsche have just released a video of the car in action.

Like the modern Porsche 935, the 911 GT2 RS Clubsport of the 991 model generation forms the basis for the limited special edition model. The concept of the centrally-positioned radiator is one of its defining features. It resembles that of the 911 GT3 R and has several advantages: its steady, optimal airflow keeps the engine temperature stable over a wide speed range, while the repositioning of the radiator ensures better protection against collision damage. The completely redesigned front apron now features a central inlet to ensure optimal airflow. Like the ‘Grello’, its double flics on the outside increase downforce on the front axle. Moreover, the vehicle features a closed underbody. The carbon fibre front lid has also been completely redesigned. Like in the 911 GT3 R, its two large vents, separated by a centre divider, funnel hot air over the roof to the rear wing. A centrally-positioned NACA duct – combined with the Porsche emblem – supplies fresh air to the cockpit.

You can find out more details about this unique Porsche 911 GT2  over at Porsche at the link below, it sounds amazing from the video.