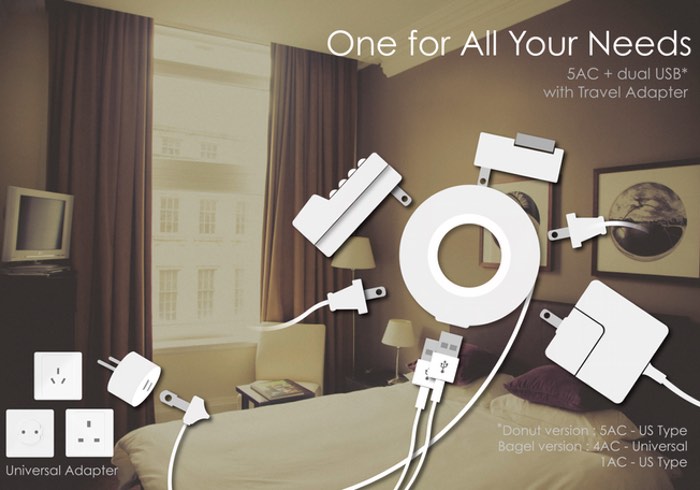 MOGICS have created a new power strip called the MOGICS Power Donut that is small enough to fit in your pocket and has been specifically design for the perfect travel companion allowing you to charge multiple devices from a compact power strip.

MOGICS have taken to Kickstarter to raise the $15,000 they require to take the design into to manufacture but have already raised over $160,000 thanks to over 3,800 backers with still 40 days left remaining on their campaign.

The creator of the Pocket Sized MOGICS Power Donut explains more about its inspiration and design.

It started with a college student who had too many devices in her flat. My laptops, camera, smartphones, power bank, table, stereo … they all need be plugged in, usually at the same time. There was really not much space to spare in my tiny apartment; the bulky power strips I used was just taking a lot of unnecessary space, not to mention the thick messy cables flying all around.

As a frequent traveller, I know that travel adapter is a necessity on the trip. But not many people realize that power strip, is also a necessity. We complain that there’s not enough electric socket or USB charging port at the airport and in the hotel. The reality is, we need power strips while traveling, but we don’t bring them. And the reason is simple: Power strips, or power cubes, are way too bulky; and they aren’t able to adapt to different socket types. The fact is, there is no power strip on the market, Kickstarter projects included, that is able to keep its cord under control: cord storage and length adjustability are essential, but lacking in all the power strips out there.

The idea of MOGICS Power Donut (and Bagel, which is an universal version of Donut – UK, EU, AU, US) is to design something elegant and powerful. Integrating with the MOGICS Adapter, we are able to combine both the functions of a power strip and a travel adapter – both of which are conventionally big and bulky – to create the perfect travel solution, with added perks such as Integrated Length-adjustable Cord, spare Safety Fuse, dual USB ports supporting Fast Charge, as well as an ergonomically designed AC plug — all this, light and slim enough to slide effortlessly in your pocket.

On the other hand, when I’m not traveling, MOGICS Power Donut serves as the best power strip (or power ring) in my daily life; keeping my desk neat and impeccably organized. Sharing the power on-the-go, and saving the space when you’re alone.

Jump over to the Kickstarter website to make a pledge from $36.