The first thing you notice about the Vita once you get past the whole comical milk carton thing of lifting it way too quickly because it’s much lighter than expected, is not any particular aspect of the hardware. It’s the confidence that the unit exudes. Sony has learned how to make a proper portable games machine just in time to make the last great one that won’t double as a smartphone. 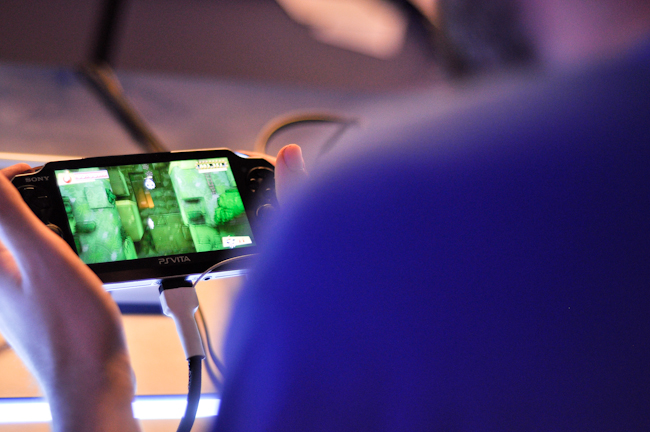 They got so much right, that it’s a little scary. Everything from the addictive clickiness of the face buttons and patterned back touchscreen to the gentle give of the analog nubs is sheer poetry to anyone who’s had to brave carpal tunnel by awkwardly shoving the original PSP’s nub where it needed to go. The centerpiece, however, is as much a liability as it is an asset. Don’t get us wrong, it’s 5 inches of everything you’ve come to expect from an OLED, from colour and crispness all the way to ridiculous viewing angles. But it’s also the reason the PS Vita has a larger footprint than most PSP in protective cases. On the other hand, it looked about 10% slimmer than even the skinniest PSP, but it’s going to be small consolation when you dig around in a bag or backpack after it.

The only elements of the Vita we didn’t get to see were the game cartridge slot and the home UI. At this point, though, that would make them the only elements that can spoil some otherwise seriously slick hardware. And when the worst thing you have to say about a portable console is that the queue for it was insane, we’d say Sony could have done a lot worse. Just look at the Go. If you can still find one.