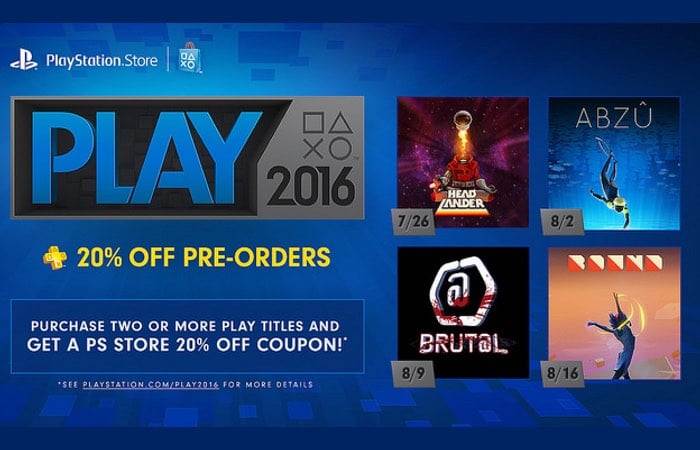 Sony has today announced that their PlayStation Store PLAY 2016 has now started and has revealed the line-up of games available via the PLAY promotion.

The PlayStation Store PLAY 2016 promotion provides 20% of pre-orders and for purchasing two or or more PLAY titles gamers will also receive a 20% off voucher for the PS store.

Andy Yen Digital Commerce Manager at SIEA explains a little more about what you can expect on the games available.

Hi everyone! The dog days of summer are coming up, but it’s also the perfect time to discover and play a great new game or four. Over the past six years, PlayStation Store’s PLAY campaign has brought you some incredible games, including Journey on PS4, Counter-Strike: GO, Rogue Legacy, and more. On behalf of the PlayStation Store and 1st and 3rd Party Games Teams, I’m thrilled to announce the lineup for PLAY 2016 — Headlander, ABZÛ, [email protected], and Bound.

All four games are available for pre-order starting today, making their console-first digital debuts on PS4. To celebrate the launch of these titles, PlayStation Plus members will save 20% on pre-orders for PLAY 2016 games. As an added bonus, each game in the PLAY 2016 lineup comes with an exclusive PS4 theme when pre-ordered. But that’s not all, anyone (PS Plus member or not) who purchases two or more PLAY 2016 titles by August 23 will receive a coupon for 20% off their entire cart purchase at PlayStation Store.* For those of you bargain hunters out there, don’t worry — you can take advantage of both offers at the same time.

For more information on the new PlayStation Store PLAY 2016 lineup jump over to the official PlayStation blog website for details by following the link below.