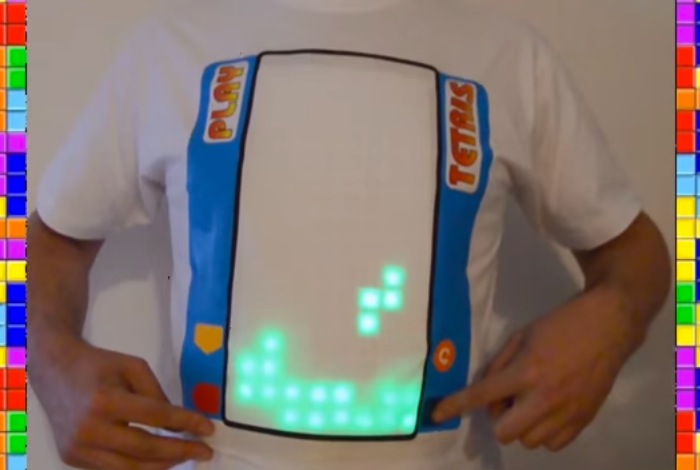 The 30th anniversary Tetris T-shirt has been created using 128 LEDs and is powered by an Arduino Uno development board together with 4 x AA batteries. Check out the video after the jump to see the Tetris T-shirt in action.

As you can see from the video it’s probably easier for someone other than the wearer to be able to play the game. As looking down the game from the top provides a different perspective than when playing Tetris normally.

Back 30 years ago Tetris was launched by Russian Scientist Alexey Pajitnov, and the first version of the Tetris game was developed on an Electonica 60 which was then ported to an IBM PC system in 1985 to be later launched in the US and Europe during 1987.

“The Tetris game is an electronic puzzle game that was created by Alexey Pajitnov in 1984, while working in the USSR as a computer programmer. Pajitnov often programmed games to test new equipment using simple tasks, and in his spare time, developed a computer game inspired by his favorite puzzle board game Pentominos. The objective of Pentominos was to fit 12 different geometric-shaped pieces formed out of five squares into a box.

Pajitnov’s vision was to create an electronic game where players arranged puzzle pieces in real time by having them “fall” faster and faster from the top of the screen. Pajitnov designed the game using seven distinctive playing pieces made from four squares. He called it Tetris, after “tetra,” the Greek word for four, and tennis, his favorite sport.

After giving the game to his colleagues, it became an instant, hugely addictive hit, and shortly thereafter spread like wildfire throughout the Soviet Bloc’s computer literate. His subsequent friendship with BPS President and CEO Henk Rogers, brought the Tetris game out of the Soviet Union to become one of the most widely played electronic games of all time.”

Since its worldwide launch Tetris has become an iconic computer game and is available to play on a wealth of different devices and has been modified and developed into a number of versions over the years. For more information on the awesome Tetris game jump over to the official website here.