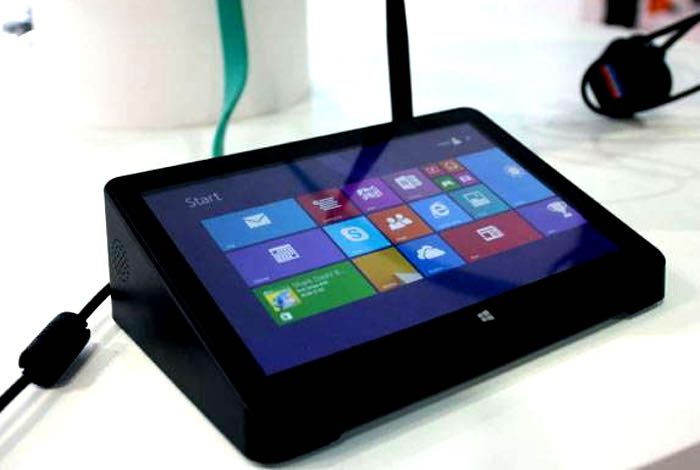 At this years HKTDC fair in Hong Kong, a new style of Windows mini PC has been unveiled that includes a touchscreen display and goes by the name of the Pipo X8.

The Pipo X8 takes the form of a wedge shaped computer case which has a tablet style display fitted to the sloping side providing users with a 7 inch, 1024 x 600 resolution display, offering 5 point multi-touch input.

Powering the mini PC is a choice between an Intel Atom Z3735F or Atom Z3736F Bay Trail processor, both of which will be supplied running Windows 8.1 with Bing software.

Other features of the Pipo X8 include 2GB of RAM together with 32GB to 64GB of storage as well as a handy microSD card reader for further expansion. Connectivity is provided by 802.11n WiFi and Bluetooth 4 and the Windows mini PC includes 4 x USB ports, HDMI and Ethernet jacks.

Its creators have suggested the possibility of also launching a dual-boot version offering both Android and Windows to be launched at a later date. The Pipo X8 Windows mini PC is expected to be launched next month and priced at around $100. Watch the video demo below to learn more about this unique Windows mini PC.