Pioneer has released details of their new augmented reality head-ups display that will be arriving in 2012. Which provides a navigation systems that is projected on to the drivers widescreen. Allowing the driver to keep their eyes on the road and still view directional and road traffic information. With traditional in-car navigation system drivers need to divert their gaze from the road.

Pioneer is hoping to integrate their system into smartphones in the future making it easy for consumers to install the new system in their vehicles. Watch the video after the jump to see it in action. 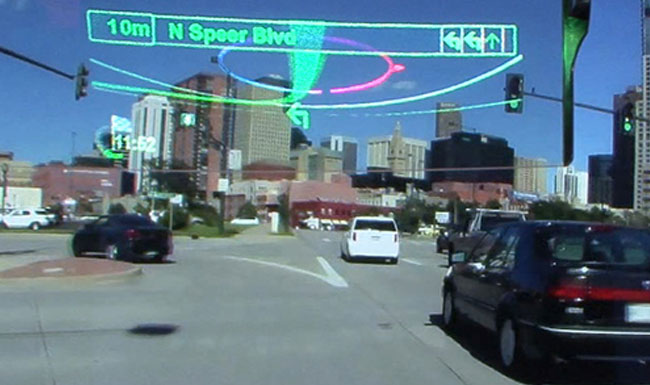 “An image is created by scanning the laser. Then the image is magnified at a distance, using the principle of a concave half-mirror, called a combiner.”

“Last year, we produced a very large version of this system, just to show it could be done. This year, we’ve made the product compact, so it will fit in a car and we can release it commercially. We’ve also incorporated AR technology, to show routes directly on the scenery the driver sees. So this display can show useful content, such as arrows where the driver needs to turn, and restaurants and parking areas as pop-up information.”

Unfortunately no information on pricing or worldwide availability has been released as yet, but we will keep you updated as always.