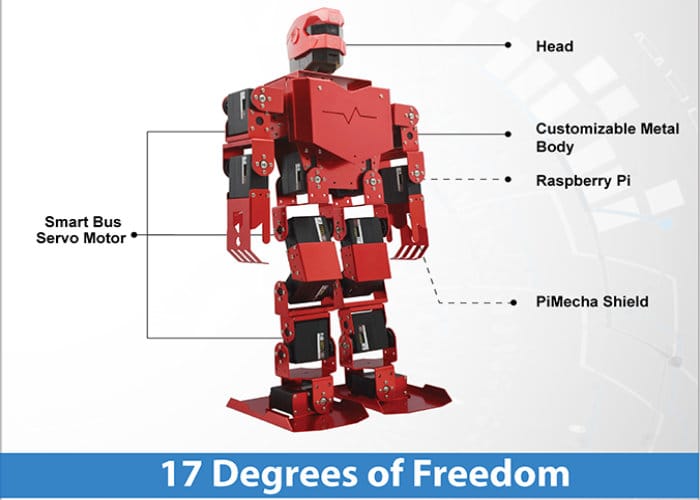 SB Components has created a new Raspberry Pi powered humanoid robot aptly named the PiMecha which is now available to back via Kickstarter with kits available from £299. A fully assembled humanoid robot complete with Raspberry Pi 3B+ mini PC is available from £369, with worldwide shipping expected to take place during September 2018. To learn more about the construction and features of the PiMecha robot watch the demonstration video below.

The PiMecha Is powered by a Raspberry Pi and is capable of movement thanks to the inclusion of precise smartbus servo motors. “PiMecha is versatile, upgradable and customizable with various parts, sensors and cameras. User can attach their own components, ranging from a simple ultrasonic sensor to a frightening laser to scare off unwanted intruders. “

Thanks to the outer metal shell design and servos the Raspberry Pi robot is capable of offering 17 degrees of freedom via the efficient communication shield, and its designers have made it possible to attach your own shell or parts, to make it a special edition only you own thanks to the custom software. “ With the settings software, you can program individual servomotors. You can assign and change baudrate, ID, maximum and minimum Torque or check the different functionality of the motor. This software comes with a detailed manual so you don’t need to worry; we got you covered”.

For more details and full specifications jump over to the official Kickstarter crowdfunding campaign page by following the link below. The PiMecha Robot is both open source and developed using Python.