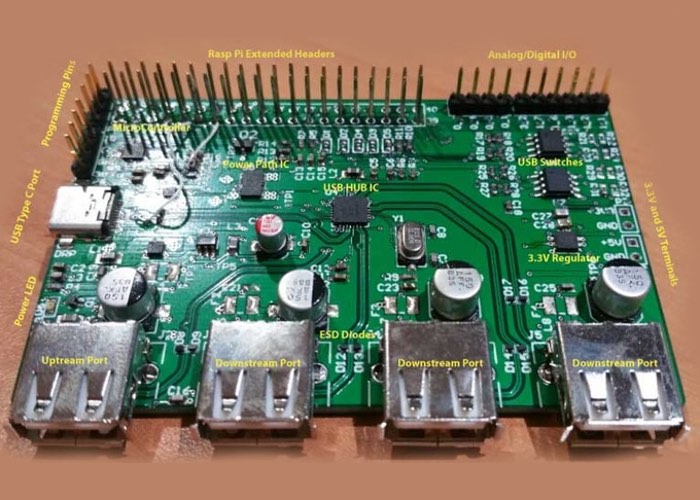 Raspberry Pi enthusiasts that would like to be able to connect the new USB-C cables and devices to their mini PC may be interested in a hub which is compatible with all Raspberry Pi PCs including the smaller Raspberry Pi Zero called the PiCHUB.

The PiCHUB has been created by Mark Chin basted in Waterloo Canada and has taken to Kickstarter to raise the CAD $14,000 he requires to take the new USB-C hub into production.

Watch the promotional video below to learn more about its inspiration, design and construction.

The PiCHUB plugs into a Raspberry Pi 26/40 pin header. If you are powering your Pi from a standard USB micro adapter the PiCHUB will power up when the Type A USB jumper cable is plugged in from the Pi USB port to PiCHUB upstream Type A USB port. This will provide power to the development board but is limited by the Pi’s USB fuse. Devices can be plugged into all 3 Type A ports and the Type C port using the type C adapter provided. The 15W USB Type C charger can be plugged directly into the Type C port while the Pi is already powered up and will switch the devleopment board over to Type C power providing up to 3A of power.

Port control of the Type C USB port is accomplished via a python script which must be run at the time of Pi bootup. This can be added into the rc.local file to run at bootup. Python-smbus library must be installed on your Pi in order for the I2C script to work. Communication is done through I2C. The PSOC 4 or ATTiny85V microcontroller was added to provide additional interfaces for the Pi and can be programmed with a PSOC MiniProg3 or Atmel USB programmer which is not included in the perks.

Header P7 will allow you to isolate the power to the microcontroller when programming. PSOC chips are versatile programmable SOC’s with anlog and digital blocks providing solutions for many applications with integrated components. Backers can also choose the option of an Atmel ATTiny85V microcontroller instead of the PSOC 4 which has a large community development support.

Features of the Raspberry Pi PiCHUB hub include :

For more information on the new PiCHUB jump over to the Kickstarter website for details and to make a pledge by following the link below.