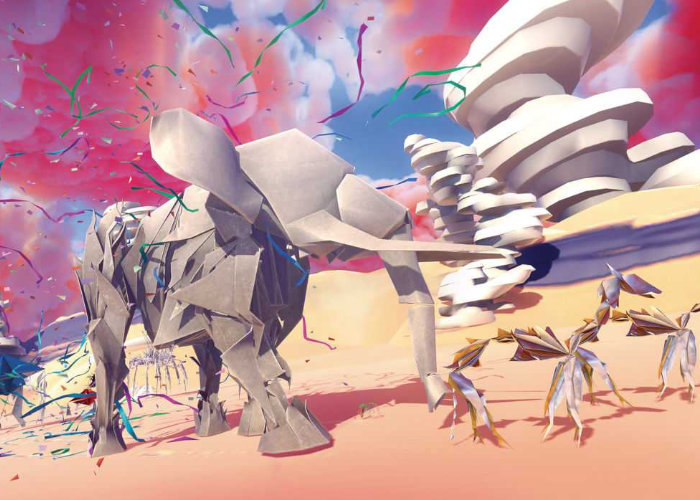 Developer Pixel Reef shares more information about their new game and the “surrealistic world” over on the official PlayStation blog this week. Eric Chahi Creative Director at developer Pixel Reef Reveals more about what you can expect from the PlayStation VR game which is now available to purchase. Learn more about the technology the creative team developed specifically for the Paper Beast game and the challenges they encountered as they worked to make this universe feel so alive.

“The living world, of course! The way animals move, their curiosity, the way they look at things… There is a strong bond between the land and the living. Animals have an impact and influence on their environment. Look at ants, beavers, or even simple earthworms and how they change the terrain. That’s part of the gameplay. Another inspiration is traveling and wild areas like Sahara or Tassilia, with their majestic dunes and rocky outcrops.

Virtual reality allows you to feel that. Paper Beast plays with these spaces; you go from closed environments to open spaces. This is often shifted and surrealist by the intrusion of elements related to data, another of the game’s themes. It’s a surprising hybrid world that draws on reality to sublimate it.”

“The main challenge was to create a home-made physics engine that suits our needs. We wanted creatures to have fully simulated locomotion. We started by working on the sandbox for two years, which gave us the foundation of the engine. Then, we worked on level design. We were looking for large environments with lots of landscape elements. As we progressed, we zeroed in on a balance between design and technology. The most challenging part was to work on the game’s performance, ensuring that it could run at 60 FPS in VR. It has been a tremendous effort. We made sure there was no compromise on the quality of the game.”

To learn more about the new PlayStation VR game jump over to the official PlayStation blog by following the link below.