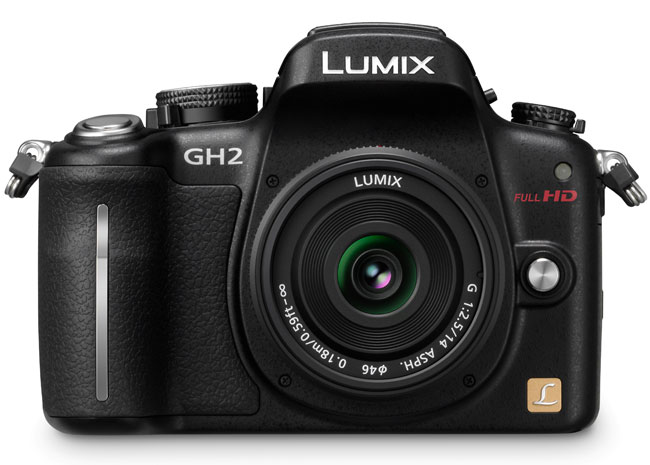 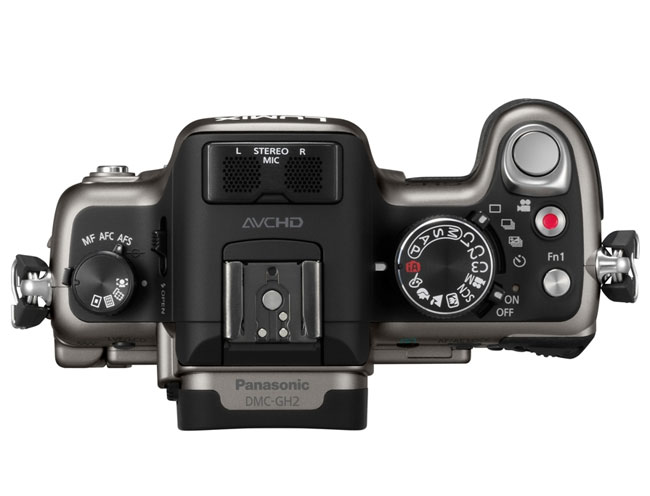 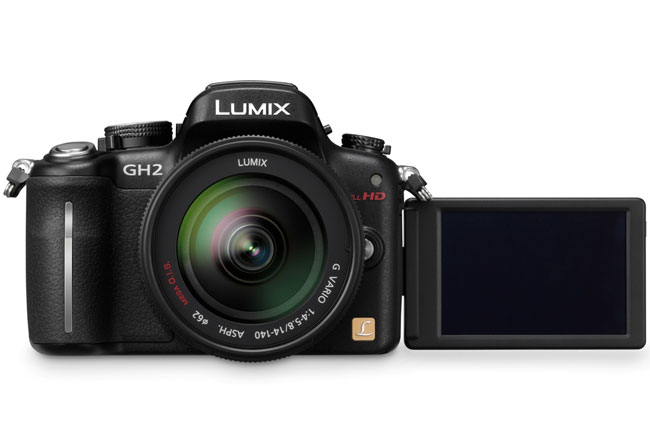 You can see full details in the press release below.

Compatible with the Micro Four Thirds System standard, the lightweight LUMIX GH2 is newly designed with an easy-to-hold grip and includes a refined image processing engine and sensor that delivers fast, sharp photos, full HD video recording, and the ability to take 3D photos with Panasonic’s new interchangeable 3D lens. In addition, the intuitive touch-control operation provides ease of use in shooting and playback.

“The LUMIX GH2 is Panasonic’s most professional-level DSLM camera yet, giving users the option to be more creative than ever, from recording video in full HD with cinematic effects to taking 3D photos with our new lens,” said Darin Pepple, Senior Product Manager, Imaging, Panasonic Consumer Electronics Company. “At the same time, its compact size can fit in the palm of your hand and its faster auto focus and intuitive touch-control shooting make it possible for even new photographers to literally point-and-shoot for stunning images.”

The LUMIX GH2 combines features for both the videographer and photographer, making it a true hybrid digital camera. A dedicated button on the top of the camera lets users instantly record videos while shooting photos without changing any extra settings. Building on the momentum of its successful predecessor, the LUMIX GH1 – the LUMIX GH2 can now record full HD 1920 x 1080 videos in smooth 60i, doubling the sensor output from 25p/24p to 50p/60p(2). The camera also supports 1080/24p native mode at 24 Mbps, the highest in AVCHD format, for richly expressive video. Other video features in the LUMIX GH2 include:

* New Cinema mode: Record video with rich cinema-like gradation. Added as an option of popular Film mode.
* New Variable Movie mode: Record video in variable frame rate – 80, 160, 200 and 300 percent – speeding up or slowing frames for more creative videos.
* Touch auto focus (AF): Point at the subject on the screen and shift focus to make it stand out against the background.
* Still photos at (16:9): Instantly take a 14MP photo, while recording videos and also save a frame of video as a photo during playback.
* Record high quality sound: With Dolby® Digital Stereo Creator and optional accessory Stereo Microphone (DMW-MS1).
* HDMI output: Monitor images on a separate screen while still recording video.

The LUMIX GH2 features intuitive touch-control operation, made popular with the LUMIX G2 for its outstanding usability in shooting and playback. The LUMIX GH2 combines the easy-to-see free-angle Intelligent LCD with the newly developed Multi Aspect Wide Screen LVF (Live View Finder) for more comfortable shooting from any angle.

* Touch the subject on the LCD to adjust AF. Once a user locks onto a subject, the camera tracks the subject with AF tracking even if it moves. Then, with a touch of the screen, users can select the area of focus appropriate mode (e.g., portrait) and even enlarge an image (1x, 5x or 10x) by dragging it on the screen.
* Touch and view the screen from any angle, rotating the screen 180 degrees side to side and tilting it 270 degrees up and down for approximately 100 percent of field of view.
* Change menu settings quickly by touching the screen, shortcutting the time it would take to navigate using standard cursors.
* Touch thumbnails to play back images one by one or drag images over the screen with a finger to browse the collection of photos, as though flipping the pages of a book.
* View primary colors – red, blue and green – 25 percent more vividly when compared to the GH1, thanks to a newly designed LCD and LED backlight.

* A display area of 1,530,000-dot equivalent resolution.
* 100 percent field of view and 0.71x magnification.
* Reduced color breakup by half for stunning images at any angle.
* Live View at 60 frames-per-second because of the Live MOS sensor, which processes signals directly from the image sensor to the LCD in real time. This allows the user to check the framing accurately from corner to corner when composing a shot.

The LUMIX GH2 includes 22 different shooting modes for creative shooting options. When shooting video, users can choose from ten different modes, including the new Cinema mode, and set the contrast, sharpness and saturation levels for each. For still photos the LUMIX GH2 features the My Color mode with a total of seven preset effects – Expressive, Retro, Pure, Elegant, Monochrome, Dynamic Art, and Silhouette – while also keeping the Custom mode, which lets users manually set the color, brightness and saturation levels and store their favorite settings. With the Full-time Live View function, users can see how these settings will affect the images before they shoot. The LUMIX GH2 also features more shortcut buttons for frequently used settings.

In addition to the advanced functions that will satisfy experienced photographers, the LUMIX GH2 is easy enough for beginners to use comfortably because of Panasonic’s iA (Intelligent Auto) mode, a popular setting in the LUMIX point-and-shoots that automatically engages features and settings for optimal image quality by detecting the shooting environment. The LUMIX GH2 features new additions to the iA mode including Intelligent D-range Control for optimized exposure of an image and Intelligent Resolution for better-balanced sharpness in images for printing at larger sizes.

After users capture images using the LUMIX GH2, it’s easy for them to enjoy their photos or HD videos easily on a Panasonic VIERA HD television. Simply remove the SD Memory Card from the camera and insert it into the VIERA Image Viewer (SD Memory Card slot) on a VIERA HDTV or Panasonic Blu-ray disc player(6) to play the content. Alternatively, an optional mini HDMI™ cable can be used to output still photos and video recorded with the LUMIX GH2 directly to the Panasonic HDTV via VIERA Link™. Using the VIERA HDTV’s remote control, users can take advantage of the LUMIX GH2’s advanced playback and slideshow features. Photos taken with Panasonic’s new interchangeable 3D lens can also be viewed in 3D via the 3D Image Viewer.

In addition to LUMIX G lenses, the LUMIX GH2 and other LUMIX G Series digital cameras can use any interchangeable lens that complies with the Four Thirds System standard via an optional mount adaptor DMW-MA1 and with the prestigious Leica M/R Lenses via DMW-MA2M or MA3R(7). Additional accessories include external flashes, filters, a stereo microphone, a remote shutter, HDMI mini cables and a variety of stylish straps and bags. For more information on LUMIX digital cameras and all available accessories, visit: www.panasonic.com/lumix.

(5) Compatible with the LUMIX DMC-GH2 and LUMIX DMC-G2 with the firmware ver.1.1. A 3D media player that supports the MP (Multi-Picture) format is required to view 3D images.

(6) AVCHD motion images recorded onto an SD Memory Card or a DVD cannot be played on a device that does not support the AVCHD standard.

(7) Some functions on the LUMIX DMC-GH2 are not available depending on the lens that is mounted.

*Dolby and the double-D symbol are trademarks of Dolby Laboratories.

*All other company and product names are trademarks of their respective corporations.

*Design and specifications are subject to change without notice.

Based in Secaucus, N.J., Panasonic Consumer Electronics Company (PCEC), is a Division of Panasonic Corporation of North America, the principal North American subsidiary of Panasonic Corporation (NYSE: PC) and the hub of Panasonic’s U.S. marketing, sales, service and R&D operations.  In its commitment to provide consumers with extensive imaging resources, Panasonic LUMIX established the Digital Photo Academy, a series of nationwide workshops designed to instruct consumers how to optimize the features on their digital cameras and produce high-quality photos. Panasonic is pledged to practice prudent, sustainable use of the earth’s natural resources and protect our environment through the company’s Eco Ideas programs. Company information for journalists is available at www.panasonic.com/pressroom.

For more than 20 years, Panasonic has been proud to support the Olympic Movement as an Official Worldwide Olympic Partner in the Audio and Visual Equipment category and, beginning in 2009, in the Digital Imaging category as well. Panasonic has also renewed its partnership with the International Olympic Committee for an additional eight years through the 2016 Summer Games. For more information, visit http://panasonic.net/olympic/.